PIC: This really weird anniversary gift from a man to his girlfriend is going viral

Considering there's plenty of pressure on couples to get each other the 'perfect' present at this time of year, we can understand why some people resort to thinking outside the box when they're buying gifts for their other half.

One present in particular that is going viral is an illustration that one boy did for his girlfriend, the sister to Twitter user alana banana. 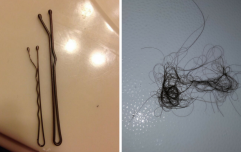 18 ways your life changes when your girlfriend moves in

END_OF_DOCUMENT_TOKEN_TO_BE_REPLACED

Alana shared a picture on Twitter of the drawing her sister's boyfriend did and then gifted to his favourite girl, but it's safe to say the caricatures are... a little on the completely shit side.

Needless to say, people are having a good laugh about it.

I'm fucking screaming this is some racing ray shit

he is absolutely planning a murder

popular
Netflix has just added an incredibly tense 97-minute thriller
A county-by-county breakdown of the average rent in Ireland as rent inflation reaches record high
Nearly 100 flights delayed at Dublin Airport on Monday
18 counties hit with weather warning as temperatures set to reach 29 degrees
WhatsApp introduces way to choose who can and can't see you're online
Irish person dies after drowning in Spanish resort swimming pool
QUIZ: Can you get top marks in this short but tricky Irish geography quiz?
You may also like
5 years ago
17 signs you live with an inhuman monster
5 years ago
PIC: This girl found a receipt in her boyfriend's car and was convinced he was cheating
7 years ago
Survey reveals the 10 most popular nicknames men use for their penis
8 years ago
So there's an app that automatically sends sweet texts to your girlfriend for you
8 years ago
A partner's guide to the mystery of buying make-up, with some help from the Kardashians
8 years ago
[CLOSED] Competition: WIN a Valentine's Day hamper worth over €150 with LloydsPharmacy
Next Page