What the shell? Passenger stopped from boarding after dressing his turtle up as a burger

He would have got away with it too if it weren’t for the pesky security staff.

How he thought he could get away with it is hard to comprehend, but a Chinese passenger attempted to smuggle his pet turtle in his luggage bag by dressing him up as a burger.

According to The Irish Examiner, the man came a cropper when an X-ray machine detected unusual “protrusions” poking out from a burger bun inside his luggage bag and inspectors asked to take a closer look.

After denying there was a turtle in his bag, he was forced to confess when security staff found his “beloved” pet smeared in mayonnaise. 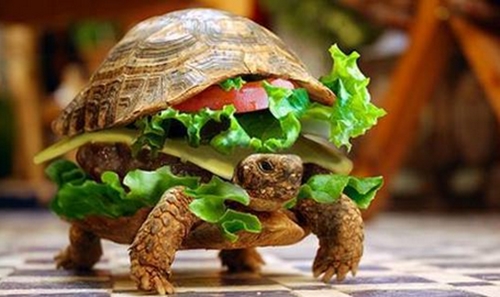 The smuggler, known as Mr. Li, claimed he could not stand to be apart from his pet, before being persuaded to leave the turtle with a friend.

You might say it was a case of turtle-recall.

popular
James May reportedly hospitalised after crashing into wall at 75mph filming new show
Disney+ has just added 10 big movies to its library
Netflix has just added an incredibly tense 97-minute thriller
QUIZ: You'll need to be razor-sharp to get 100% in this General Knowledge Quiz
An exciting Irish crime thriller is among the movies on TV tonight
The JOE Friday Pub Quiz: Week 307
The JOE Music Quiz: Week 117
You may also like
4 months ago
Rescuers find no survivors after China Eastern Airlines plane carrying 132 crashes
4 months ago
Chinese plane with 132 people onboard crashes into mountain
6 months ago
Richard O'Halloran says he felt "totally" abandoned by Irish Government when stuck in China
6 months ago
WATCH: Reporter dragged away by Chinese official during live report at the Olympics
6 months ago
China gives Fight Club a new ending, manages to completely change the plot of the movie
1 year ago
China confirms first global case of human bird flu strain
Next Page