Half of young Irish adults still go on holiday with their parents, shows study

Nothing to do with money, surely? We'd hardly be that cheap, would we?

Except yes, yes we would - because half of young Irish adults would happily take a holiday with their parents just so they'd pick up the bill at the end of the day.

Cheapskates, the lot of us.

And yeah, there are definitely a couple of other reasons why people want to holiday with their parents, but the money issue is definitely up there, alright?

New research conducted by Royal Caribbean found that 49% of adults in Ireland aged between 25 and 34 still go on regular holidays with their parents.

The study also showed that over half (58%) of parents still foresee paying for their grown-up children when they're on holidays, and that 23% of young adults still expect their parents to pick up the bill when they're away.

However, two thirds of people said that they opted to go on holidays with their parents because they simply enjoyed spending time with them - and not spending their money. Apparently.

In a surprising twist of events, it's actually cheaper for parents to bring an adult daughter away with them rather than a son, with the former costing around €709 and the latter €766. 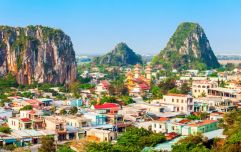 Here's the top 10 holiday destinations for 2020, as searched on Google

END_OF_DOCUMENT_TOKEN_TO_BE_REPLACED

Other said that their family members go on the best holidays, while some admitted to wanting their holiday paid for by a parent.

"The world of family travel has changed rapidly over the last number of years with so much choice and exciting experiences available," said Sarah Slattery from the Travel Expert.

"There’s no longer such thing as a ‘one-size-fits-all’ holiday.

"The typical shape of family holidays has changed dramatically, shifting towards multigenerational families enjoying experiences together, bringing grandparents, aunts, uncles and grandchildren along on a joint holiday adventure."

Whatever floats your boat.


popular
Here are Ireland’s favourite takeaways, as per the National Takeaway Awards
TG4 to air a documentary on Ireland's homeless crisis this evening
Seven leaders announced for RTÉ's multi-party debate
"Totally unacceptable." Final year students at WIT hit out after extra module added to final semester
Met Éireann forecasts risk of sleet and possibly snow in parts of Ireland this weekend
A LEGO version of the International Space Station is being released
QUIZ: Week 16 of JOE's 19 in 90 quickfire quiz is here
You may also like
3 months ago
A mega-rich family will pay you and a friend €80k to mind their homes in Switzerland and New York
3 months ago
Inchydoney, Clonakilty and an unrivalled sense of community: A Young Dubliner's first trip to west Cork
8 months ago
Irish Rail warn of Heuston Station diversions this bank holiday weekend
9 months ago
South Africa's iconic Garden Route: 5 reasons why it's legitimately breathtaking
1 year ago
Over 70 flights among those cancelled at Heathrow due to poor weather conditions
1 year ago
This ridiculously simple hotel room hack has just shook everyone on Twitter
Next Page