"And when Hell is full, the dead shall begin to make their way towards the Miami beaches..."

In the middle of a power outage in a small town in Florida, residents were also informed that there was an other, perhaps slightly more pressing problem.

END_OF_DOCUMENT_TOKEN_TO_BE_REPLACED

According to Newsweek, the power outage lasted less than 30 minutes at approximately 2am on 21 May, and that it had affected less then 8,000 people, whereas the zombie outbreak reportedly affected far less than that.

(But of course that is what they WANT you to think! #ConspiracyTheory)

"We are looking into reports that the system mentioned zombies," said Ben Kerr, the city’s public information officer, in the post.

"I want to reiterate that Lake Worth does not have any zombie activity currently and apologize for the system message." 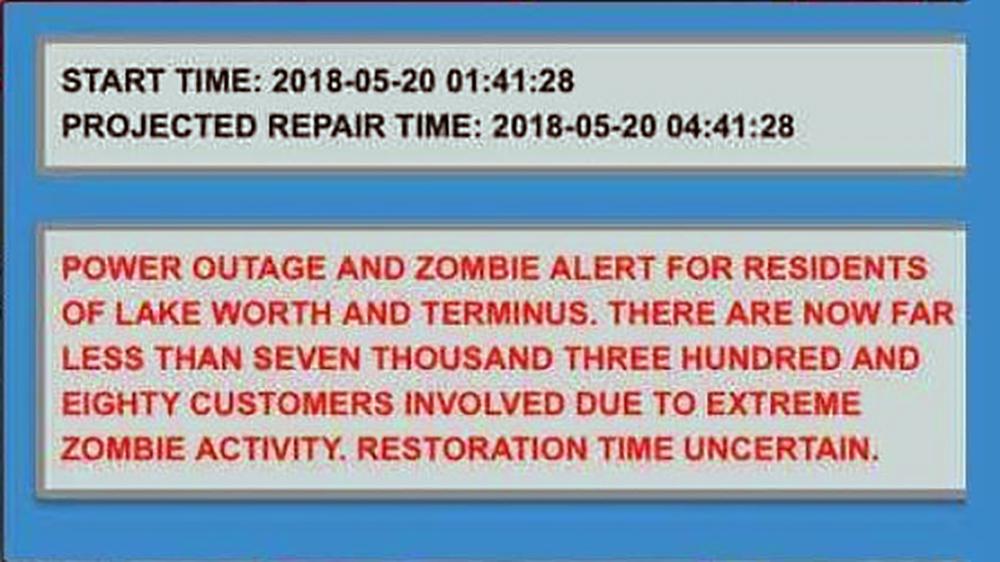 popular
The JOE Friday Pub Quiz: Week 300 - the Triple Century
One of the most underrated sequels of all time is among the movies on TV tonight
Rain and thunderstorm warning extended to include 15 counties
A classic Western is among the movies on TV tonight
Met Éireann gives update on weather warnings for this weekend
An underrated Jason Statham thriller is among the movies on TV tonight
QUIZ: Can you match all 32 counties up to their province?
You may also like
9 hours ago
The Chase star Bradley Walsh can't control his laughter after the most NSFW answer ever
1 week ago
WATCH: Lightyear star reveals who'd win in a fight between him and Thanos
1 week ago
30 years on, The Simpsons writer confesses he misunderstood iconic joke
4 months ago
30 years ago, Arnie's biggest prank ended with Stallone's biggest flop
4 months ago
China gives Fight Club a new ending, manages to completely change the plot of the movie
6 months ago
Who tweeted it: Simu Liu or Rahul Kohli?
Next Page