Almost 150,000 people have ordered a Cybertruck so far

Despite a disastrous launch.

Tesla chief executive Elon Musk tweeted on Saturday that there is already 146,000 orders for the electric carmaker’s Cybertruck, which was unveiled at a flashy event in Los Angeles on Thursday.

Of those 146,000, 41% picked the most expensive tri-motor option and 42% of future customers chose the dual motor version. The remaining 17% picked the cheapest single-motor model. 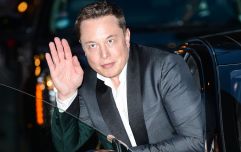 END_OF_DOCUMENT_TOKEN_TO_BE_REPLACED

It's worth noting that orders for the truck cost just $100 and are fully refundable so it's impossible to judge how many of the orders will translate into actual sales.

Shares in the firm slid following a gaffe at the unveiling event. Musk boasted about its supposedly unbreakable window glass but both side windows smashed during the demonstration.

In his tweet after the launch, Musk said: “Guess we have some improvements to make before production haha.”

With it's bizarre futuristic angles and lights, the Cybertruck was met with cheers but also bemusement from the audience.

The cheapest version, a single motor and rear-wheel drive model, will cost $39,900, and more than 250 miles of range.

The middle of the road version will be a dual-motor all-wheel drive, have more than 300 miles of range on a single charge and is priced at $49,900.

The high-end version will have three electric motors and all-wheel drive, a range of more than 500 miles and is priced at $69,900.

popular
The best memes from this year's Late Late Toy Show
Vicky Phelan says terminally ill people should have right to decide how to die
The JOE Movie Quiz: Week 130
QUIZ: Set Yourself Up with this General Knowledge Quiz
The full list of all the new shows and movies coming to Netflix in December
The Toy Show DJ brothers have been offered their very first gig
I'm A Celebrity contestants evacuated from set due to Storm Arwen
You may also like
2 months ago
SpaceX to launch first all-civilian crew into orbit
3 months ago
Elon Musk's SpaceX to launch billboard with "selfie stick" into orbit
9 months ago
Elon Musk predicts that bitcoin is "on the verge" of being more widely accepted
1 year ago
The footage of the SpaceX Falcon 9 rocket landing on a drone ship is well worth viewing
1 year ago
SpaceX's manned rocket launch this evening will be visible over Ireland
1 year ago
Elon Musk's historic SpaceX spacecraft launch postponed until Saturday
Next Page