"It's far better to pull over and get out before you light up."

As of 2017, smoking in a car while children are present has been illegal and offenders will be faced with a fixed fine of €100 with potentially more serious consequences.

However, it seems as though even if smokers are by themselves while lighting up in a car, they could still see heavy financial losses.

A survey conducted by Carbuyer found that 87% of people would refuse to buy a car that's been smoked in and as well as this, people who smoke in their cars run the risk of losing thousands of pounds when they try to sell the car on or trade it in.

Around 6,000 people were surveyed and their findings are echoed by the automotive data specialists at cap-hpi, who estimate that once potential smells, stains and burn marks had been taken into account, a car driven by a heavy smoker could easily lose up to €2,260.

Carbuyer’s editor, Stuart Milne, said the solution to the problem is a simple one: "With the cost of smoking increasing all the time, lighting up in your car is yet another hidden expense. Not only does our research show that a car that's been smoked in will be harder to sell on, but it could also cost you thousands. 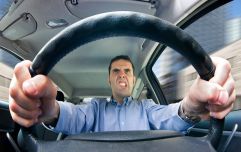 END_OF_DOCUMENT_TOKEN_TO_BE_REPLACED

"Bearing this in mind, it's far better to pull over and get out before you light up."

James Dower, Black Book editor at cap-hpi, told Carbuyer that: “The first thing a car dealer will do when looking at a car being sold by a smoker is knock down the price of the part exchange. Some dealers tell us they won’t even buy cars from smokers because of the time and expense of ridding the interior of unpleasant odours.”


popular
QUIZ: How many of these Derry Girls characters can you name?
Sinn Féin announce a series of public rallies to take place in five counties
Brendan Gleeson's upcoming performance as Donald Trump is 'scary' and 'too close for comfort'
How well do you remember these classic PlayStation 2 games?
QUIZ: Can you name the Sega Mega Drive game from the screenshot?
The JOE Friday Pub Quiz: Week 179
5 new Netflix additions to spend your weekend watching
You may also like
5 months ago
UK-registered vehicles will need a GB sticker when driving in Republic Of Ireland after Brexit
6 months ago
Man arrested on suspicion of drink-driving with infant unrestrained in front seat
7 months ago
PIC: Driver stopped going over twice the speed limit in Longford
7 months ago
PIC: Learner driver gets stuck on "sheep highway" in Kerry
7 months ago
QUIZ: How well do you think you know the rules of the road?
7 months ago
Data Protection Commission issue legal guidelines on the private use of "dash cams"
Next Page