2019 was a very good year for fans of scary movies: Midsommar, Us, The Hole In The Ground, Scary Stories To Tell In The Dark, and Crawl all had us screaming in fear and throwing our popcorn into the air in fright.

Looking forward, it looks like 2020 could be even better. As always, this list isn't exhaustive, as there could be some low key releases that haven't even been announced yet that could have us covering our eyes all the way through.

But here are the 20 scary movies that have already caught our attention:

Who Is Involved? Mackenzie Davis (Terminator: Dark Fate) and Finn Wolfhard (Stranger Things) and the director of episodes of Daredevil and The Handmaid's Tale.

When Is It Out? Friday 24 January

Why Should We Be Excited? A nanny takes a new job at a rundown mansion looking after two children when their parents die. The updated take on classic chiller The Turning Of The Screw was filmed in Ireland, and the trailer gives a good indication of the kind of scares that are in store.

Who Is Involved? Kristen Stewart (Twilight), T.J. Miller (Ready Player One), and Vincent Cassell (Ocean's Twelve), with the director of lo-fi sci-fi gem The Signal.

When Is It Out? Friday 7 February

Why Should We Be Excited? A group of scientists at a base on the bottom of the ocean find themselves suddenly under attack from a mysterious creature. It is being described as "Alien At Sea", at that is enough for us.

Who Is Involved? Elisabeth Moss (The Handmaid's Tale), Oliver Jackson-Cohen (The Haunting Of Hill House), with the writer of Saw and Insidious on directing duties.

When Is It Out? Friday 28 February

Why Should We Be Excited? After going too big with Dracula Untold and The Mummy, Universal have gone the smart 'n' small route for this monster movie, as Moss plays the ex of an abusive scientist who commits suicide, and she finds herself now being haunted by his ghost. Or is he not really dead and used his genius to create invisibility? Or is it all in her head?

END_OF_DOCUMENT_TOKEN_TO_BE_REPLACED

COLOR OUT OF SPACE

Who Is Involved? Nic Cage, Joely Richardson (Event Horizon), Madeline Arthur (To All The Boys I've Loved Before), and Richard Stanley's first feature film in over 20 years.

When Is It Out? Friday 28 February

Why Should We Be Excited? Stanley was the original director of The Island Of Dr. Moreau before being infamously fired back in 1996, and here he makes his bonkers horror return with an adaptation of H.P. Lovecraft's body-morphing thriller about a family who find their world turned upside down when a meteor crashes into their front garden.

Who Is Involved? Emily Blunt and Cillian Murphy, with John Krasinski back behind the camera.

When Is It Out? Friday 20 March

Why Should We Be Excited? Two years on from the original, the sequel picks up moments after the final frame of that movie, with Blunt taking her family (including a newborn baby) out of the safety of their home in search of other survivors of the alien menace. The addition of Ireland's own Murphy has got our excitement levels through the roof.

Who Is Involved? Anya Taylor-Joy (Split), Maisie Williams (Game Of Thrones), Charlie Heaton (Stranger Things), and Antonio Banderas (Desperado), with the director of The Fault In Our Stars.

When Is It Out? Wednesday 8 April

Why Should We Be Excited? Marvel are going full horror. A group of superpowered mutants find themselves being tormented in a psychiatric home, but it isn't clear if what they're seeing is for real, or the manifestation of one of their powers.

Who Is Involved? Keri Russell (The Rise Of Skywalker) and Jesse Plemons (Breaking Bad) and the director of Out Of The Furnace and Black Mass.

When Is It Out? Friday 17 April

Why Should We Be Excited? A teacher begins to suspect that one of her students might have a troubled home life, but soon discovers that there is something far more monstrous involved. Horror master Guillermo Del Toro is on producing duties.

When Is It Out? Friday 24 April

Why Should We Be Excited? A woman heads on a blind date, but finds herself fighting to survive after the man suddenly turns incredibly violent. We expect this one will get a lot of people talking.

When Is It Out? Friday 24 April

Why Should We Be Excited? Monae is proving to be one of the best new talents of our generation, and in this story she plays a successful modern-day author who finds herself trapped in a horrific alternate reality, from which she must uncover the truth behind if she is to escape. The mind-bending teaser trailer had our brains suitably fried.

The creators of Star Trek: Picard put to rest one of the biggest fears fans might have about the show

END_OF_DOCUMENT_TOKEN_TO_BE_REPLACED

When Is It Out? Friday 1 May

Why Should We Be Excited? Pitched as being the halfway point between The Exorcist and First Reformed, Clark plays a highly religious caregiver who becomes obsessed with saving the soul of a dying patient (Ehle).

Why Should We Be Excited? Rock not only stars but is also on writing duty for this retake on the Saw franchise. The plot is still underwraps, but rumour has it that Sam Jackson is the new Jigsaw killer.

Who Is Involved? Yahya Abdul-Mateen II (Aquaman), Nathan Stewart-Jarrett (Misfits), and Tony Todd (Final Destination), with Jordan Peele (Get Out, Us) on screenwriting duties.

When Is It Out? Friday 12 June

Why Should We Be Excited? It has been a long time since say-his-name-five-times-into-a-mirror guy has been relevant, but this spiritual sequel sees the bee-filled demon return to now-gentrified Chicago neighbourhood that he first appeared in.

Who Is Involved? Ana de la Reguera (Narcos, Goliath), Leven Rambin (Grey's Anatomy, True Detective), and the director of episodes of The Terror and Luke Cage.

When Is It Out? Wednesday 8 July

Why Should We Be Excited? While that won't be the official title upon release, all we know for sure is that this fifth Purge movie is set up to be the final in the franchise, as the plot of the movie is still being kept tightly underwraps.

When Is It Out? Friday 14 August

Why Should We Be Excited? Wan is pretty much a master of modern horror (he also had a hand in Insidious, Annabelle, The Nun, and loads more besides), and he is keeping every aspect of his new horror a total secret. It could be anything from ghosts to serial killers to anything in between. Whatever it is, people will go see it. 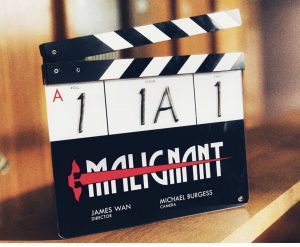 THE CONJURING: THE DEVIL MADE ME DO IT

Who Is Involved? Patrick Wilson and Vera Farmiga (veterans of The Conjuring movies) with the director of The Legend Of La Llorona.

When Is It Out? Friday 11 September

Why Should We Be Excited? Paranormal investigators The Warrens find themselves in the middle of the first time in U.S. history when a murder suspect would claim demonic possession as a defence for their crimes.

Who Is Involved? Anya Taylor-Joy (Split), Matt Smith (Doctor Who), and Thomasin McKenzie (Jojo Rabbit), with the director of Shaun Of The Dead and Baby Driver.

When Is It Out? Friday 18 September

Why Should We Be Excited? Edgar Wright is one of the most-loved directors around, so him turning his hand to horror is enough to get excited about. Throw in some time travel and the twisted world of fashion and modelling, and we're fully on board. We recently spoke to the movie's co-writer Krysty Wilson-Cairns during the press run for 1917, and we had to ask her about the upcoming horror. Check out her excitement for the world to see it right here:

Who Is Involved? Jamie Lee Curtis and Judy Greer are back with the director of 2018's Halloween reboot.

When Is It Out? Friday 16 October

Why Should We Be Excited? The surprise critical and commercial success of the 2018 movie meant that a sequel was inevitable, but the stars and director have confirmed that Kills will be the first of a two-parter ending to the series for good, before the arrival of the appropriately titled Halloween Ends in October 2021.

Why Should We Be Excited? Collette plays a woman who dumps her boyfriend, but soon finds her life beginning to take unexpected turns she could have never imagined. The idea of a genius like Kaufman going full horror, and with this insanely talented cast, we could be looking at one of the best movies of 2020 right here.

Why Should We Be Excited? Goodnight Mommy went down a treat for horror fans, and the directors' follow-up sees Keough as a soon-to-be step-mom snowed in alone with her future stepchildren. However, just as they start to get along, they begin to be menaced by strange and frightening events.

Why Should We Be Excited? Glazer is best known for her comedy works, but here she stars and co-writes in the horrific tale of a couple (with Theroux as her husband) who turn to a fertility expert (Brosnan) to help them become parents. From there on, it sounds like this will be a mix of Rosemary's Baby and the true story of Cecil Jacobson (Google it).


popular
Here are Ireland’s favourite takeaways, as per the National Takeaway Awards
Seven leaders announced for RTÉ's multi-party debate
TG4 to air a documentary on Ireland's homeless crisis this evening
Eddie Rocket’s are giving away free kids meals this Friday
Met Éireann forecasts risk of sleet and possibly snow in parts of Ireland this weekend
QUIZ: Week 16 of JOE's 19 in 90 quickfire quiz is here
Disney+ has brought forward its launch date in Ireland and confirmed its price
You may also like
1 day ago
Here are the 5 best movies on TV this evening
1 day ago
Downton Abbey creator confirms plans to start work on a sequel
2 days ago
WATCH: Joaquin Phoenix pays tribute to Heath Ledger as he accepts SAG award
2 days ago
Here are the best movies on TV tonight
2 days ago
Season 5 of Better Call Saul will see the return of two beloved Breaking Bad characters
3 days ago
The JOE Movie Quiz: Week 37
Next Page