Almost 26 years since its original release, it's telling that the events depicted in Jim Sheridan's Oscar-nominated film In the Name of the Father are still being grossly manipulated and used for political purposes.

However, the below headline in The Daily Mail did offer The Big Reviewski team an opportunity to reexamine the events depicted during In The Name of The Father.

In a recent discussion on the best moment in any Irish film, this author opted for an incredibly powerful scene in the beloved film, the moment when the inmates hold a heartbreaking wake for Giuseppe Conlon. 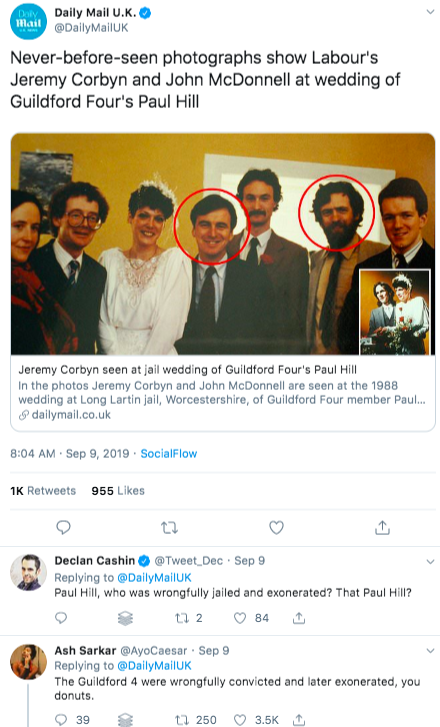 END_OF_DOCUMENT_TOKEN_TO_BE_REPLACED

For those that unfamiliar with the film, In the Name of the Father portrays the story of the Guildford Four and the Maguire Seven - the collective names of two groups whose wrongful convictions in English courts in 1975 and 1976 for the Guildford pub bombings of 5 October, 1974 were quashed after long campaigns for justice.

The film primarily focuses on the relationship between Gerry Conlon (Daniel Day-Lewis) and his father, Giuseppe (Pete Postlethwaite), both of whom are wrongfully imprisoned.

At this point, it's important to stress the differences between the real-life events and those depicted in the film.

However, in strictly cinematic terms, the film is still a tour-de-force that has lost none of its passion, anger and poignancy.

END_OF_DOCUMENT_TOKEN_TO_BE_REPLACED

In fact, during an interview with The Guardian in 2003, Sheridan said that the real point of the film was lost on some amid the controversy that surrounded it.

"I was accused of lying in In the Name of the Father, but the real lie was saying it was a film about the Guildford Four when really it was about a non-violent parent," he said.

The film is unquestionably concerned with highlighting the injustice and corruption at the heart of the trial, but it's equally concerned with showing how the relationship between a father and son can change. 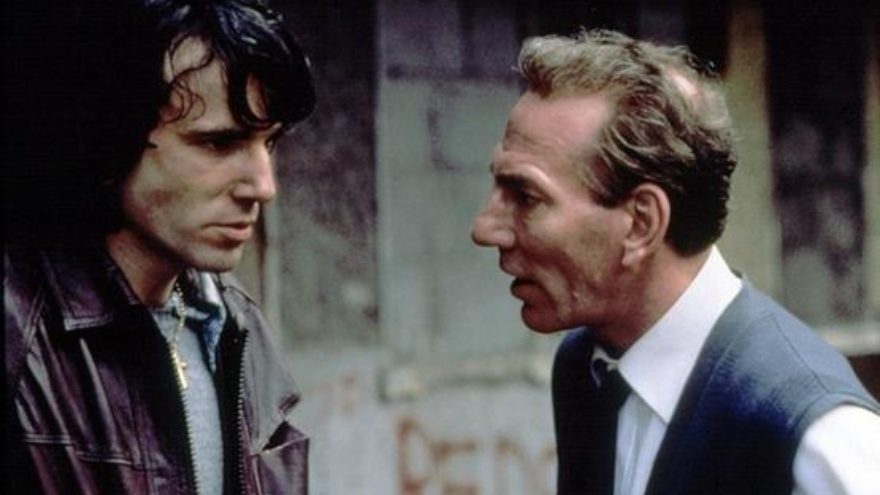 At the start of the film, the two men are in a state of almost constant bickering and conflict. Giuseppe is a modest, conservative and quiet family man. In a way, he's everything that Gerry is rebelling against.

END_OF_DOCUMENT_TOKEN_TO_BE_REPLACED

Gerry sees his dad as boring, spineless and predictable, but as the film develops, he learns that there's power and bravery in his father's strength of mind and steadfastness.

Ultimately, the change in the way Gerry sees his father changes him. It's Giuseppe's quiet strength and stoic nobility to keep fighting and never give up that inspires Gerry's renewed belief that some day, he'll be free.

Aside from the pursuit of justice, it's Gerry's maturation that drives the film.

In the Name of the Father is brimming with incredible performances - Emma Thompson is excellent throughout but like her male co-stars, she also missed out on an Oscar for her performance in the film - but it's Day-Lewis and Postlethwaite that anchor the whole thing.

There isn't an actor that can hit the 'pointed rage and fury' note quite like Day-Lewis and he has countless scenes to shine doing just that. A case in point is the moment when Gerry signs a confession under intense pressure, mental torture and coercion.

After the authorities threaten to kill his father, Gerry breaks and confesses to a crime he didn't commit.

When Giuseppe is sent to prison, it's telling that their first scene together sees Gerry fly off the handle - subconsciously blaming his father for ending up in prison - over something as small as a football medal. 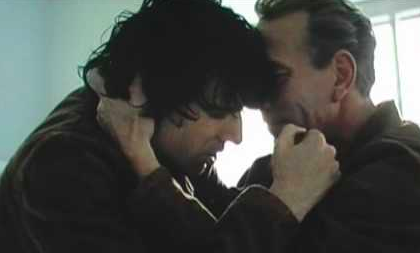 Even when Gerry is cursing his name, Giuseppe stays calm and attentive because like any good father, he knows that his son is hurting and just needs someone to talk to.

It's a perfect reflection of both men and performances.

Day-Lewis' arc throughout the film is incredible because he embodies righteous anger, charisma, and passion. To counteract this, Postlethwaite is extremely understated and quiet.

Even when he's fully entitled to embrace his rage, Giuseppe takes the high road.

There's one scene when the two men learn the truth about who planted the device at the pub in Guildford. The bomber apologises to Gerry and Giuseppe for landing them in prison.

At this point, the two men would have been entirely justified in getting angry, lashing out, and seeking revenge.

However, even at his lowest moment, Giuseppe can still park his own rage and think about the people who suffered even more than him, those that were killed during the attack.

In the Name of the Father has some incredibly bombastic and powerful scenes - the riot sequence soundtracked by 'Voodoo Child' and Gareth Peirce's courtroom speech come to mind - but it's hard to top one sequence for sheer power and emotion.

Ironically, it's practically a silent scene.

After Gerry abandons his despair and nihilistic rage, he decides to help his father with his peaceful campaign for freedom. At this moment, both men are united in their means and methods to pursue justice.

Sadly, Giuseppe Conlon would die in prison as an innocent man. 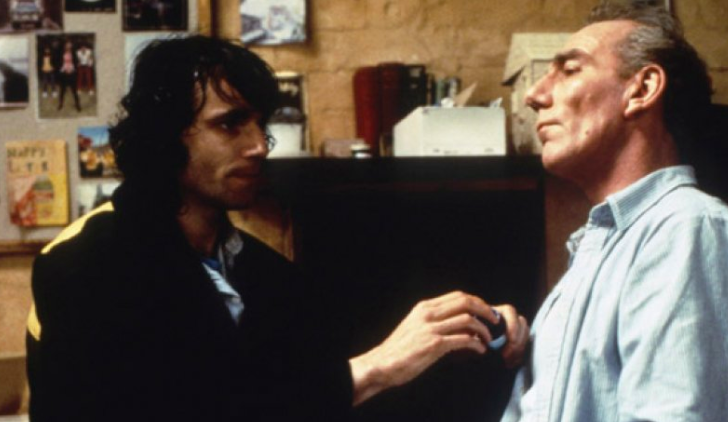 There's something haunting about the hushed tones of the priest as he enters Gerry's cell and says "your father passed away an hour ago."

Rather than fly into a rage, Gerry responds with a sombre and reflective "thank you very much".

Heartbroken, desolate, but mature, the change in Day-Lewis' performance is remarkable. Right now, he's just a son reflecting on the tragic loss of his father.

In this time of inconsolable grief, it's fitting that it's another inmate - one of Jamaican descent - leading the heartbreaking, simple and powerful tribute to Giuseppe Conlon.

Even criminals can spot someone decent, honourable and innocent.

The piano notes from Sinead O'Connor's track 'You Made Me the Thief of Your Heart' play out and Peter Biziou's cinematography as the burning papers fall is beautiful.

There are no words.

Just a moment of quiet reflection about what has been and the battle still to come.

In a previous interview, Jim Sheridan said that the scenes between Day-Lewis and Postlethwaite took on an extra significance after the film wrapped due to the relationship he had with his own father.

"My dad loved it (In The Name of the Father) because he was always the negative guy in the movies I made, like The Field. In the plays I wrote, sometimes I put my own father's name in it and my mother would go to the theatre and say 'that's you (his father)' and I'd wince. Then, I realised that it's not really my dad (being portrayed), it's just the situation.

"I realised that I had to make a film about a good dad," he added.

"I'd tell him that and he'd be totally happy. I made the movie and on the opening night, I said the prototype for My Left Foot was my mother, the prototype for this (In The Name of the Father) is my father. My dad walks up on stage, gets a big clap, and he hugged me. Then, in my ear, he says 'I love you.' I pushed him back to look in his eyes because I've never heard that before. Pete Postlethwaite told me that he was crying in the back. My father was dead two weeks later, that's mad."

In light of that information, an already powerful moment has been elevated to a whole new level.

You can listen to The Big Reviewski team chatting about In the Name of the Father below.

House of Rugby Ireland · Quinn Roux on finding a home in Ireland and Mike McCarthy brings the absolute HEAT!
popular
20 of the best comedies to watch on Netflix right now
The JOE Friday Pub Quiz: Week 227
Yewande Biala releases statement discussing racism on Love Island
Gardaí warn of scam targeting AIB customers
Bernie Sanders is using his inauguration meme to raise money for charity
QUIZ: The JOE Music Quiz: Week 41
The 50 most iconic songs of all time* have been revealed
You may also like
2 days ago
Netflix confirm Bridgerton Season 2 is on the way
2 days ago
Here are the best movies on TV this evening
2 days ago
The full list of all the new shows and movies coming to Netflix in February
2 days ago
10 prequels that are actually better than the movies that came before
2 days ago
Carole Baskin is obviously delighted Joe Exotic wasn't pardoned
2 days ago
Family Guy creator in talks to reboot The Naked Gun with Liam Neeson
Next Page