You might not know the name Gary Cooke, but you certainly know who he is.

Cooke is one-third of the legendary Aprés Match sketch comedy troupe, most famous for his spot-on impersonation of Eamon Dunphy.

Not content with lampooning Ireland's best-known football pundit, Cooke also tries his hand at impersonating Bono from time to time... But he's been warned against it, he revealed to the Irish Sunday Mirror this weekend: 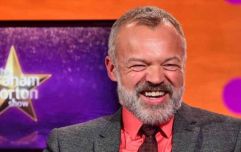 END_OF_DOCUMENT_TOKEN_TO_BE_REPLACED

Speaking to the paper, he said:

“I remember some of Bono’s mates telling me my impression of Bono was not really good enough. And really, to steer clear, that I shouldn’t be doing it.

“His Praetorian Guard kinda threatened me, you know? In a kind of nuanced, humorous way.

“But I knew they were kind of, they were like best friends on the payroll. ‘You’re not allowed to say that’ – some people kind of see themselves as above it.”

The troupe have been parodying U2 for a long time, such as this sketch of their performance Live At The Olympia in 2001.

popular
Harvard study reveals how many times men should ejaculate each month to stay healthy
Parents left in shock after gorillas start mating in front of kids at zoo
Colin Farrell shouldn't win the Oscar this year
Conor Mcgregor hit by car ‘at full speed’ while cycling
The JOE Friday Pub Quiz: Week 331
Man wins $1m on lottery ticket after someone pushed in ahead of him in queue
Close call as Paul McCartney tries to pose on Abbey Road crossing
You may also like
2 weeks ago
All 40 tracks that will be included on U2's new album, Songs of Surrender
2 months ago
U2 drummer Larry Mullen Jr. says band may perform without him in 2023
2 months ago
Bono and Ryan Tubridy are among the "most admired" people in Ireland, apparently
3 months ago
Gerry Adams dismisses claims that IRA wanted to kill Bono
3 months ago
Would you pay over €60 to hear Bono read from his book? Now you can!
5 months ago
"I saw grown men crying!" – Arcade Fire's legendary Irish live debut revisited
Next Page