This can only be a good thing.

Nobody is going to argue that Christopher Nolan's Dark Knight Trilogy wasn't mostly great, but one of the things it didn't do well was Batman's hand-to-hand combat.

It always very much felt like someone in an armoured suit they could barely move around in, fighting bad guys one-on-one, in an incredibly awkward-looking style of fighting.

Not sure what we're talking about? Well....

END_OF_DOCUMENT_TOKEN_TO_BE_REPLACED

The next version of Batman, who went on to fight against and then with Superman in Dawn Of Justice and Justice League, was much better at the kung fu stuff, but was also a big fan of straight-up killing people, which let down the whole "being Batman" bit.

END_OF_DOCUMENT_TOKEN_TO_BE_REPLACED

Anyways, that is all behind us now, and we're getting another take on Bruce Wayne, with Robert Pattinson behind the cowl and cape this time, and when it comes to the fisticuffs, it looks like the film will be getting some influence from one of the best in the game.

In a since-deleted Instagram post, instructor Rigan Machado, an 8th degree red and black belt in Brazilian jiu-jitsu, shared a pic of himself and Pattinson in the gym, practising some moves, with the caption "Batman is coming": 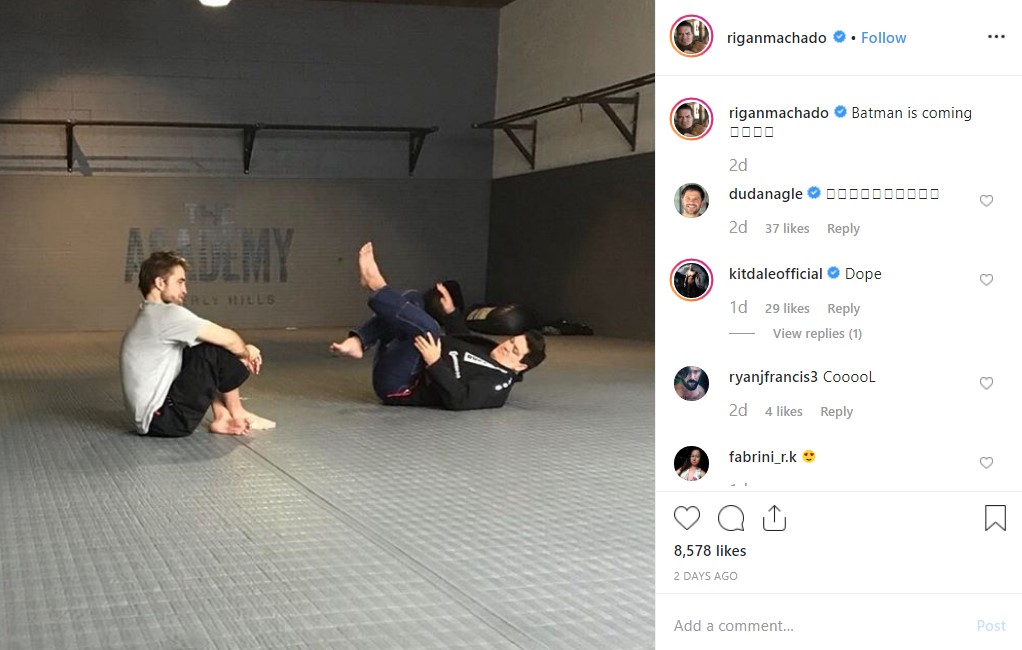 END_OF_DOCUMENT_TOKEN_TO_BE_REPLACED

Machado trained Keanu Reeves on the choreography and stunts for the John Wick movies, and over the years has also trained with the likes of Ashton Kutcher, Bradley Cooper, and Charlie Hunnam.

This is obviously still very early into the pre-production for The Batman, which isn't due to arrive in Irish cinemas until June 2021, but obviously any kind of nod towards the intense action of John Wick can only be a good thing.

popular
WhatsApp introduces way to choose who can and can't see you're online
Nearly 100 flights delayed at Dublin Airport on Monday
RTÉ tries to solve Michael Collins murder in new documentary
QUIZ: Can you get top marks in this short but tricky Irish geography quiz?
Motorcyclist in his 30s dies following two-vehicle collision in Kerry
Family of Ashling Murphy share heartbreaking tribute at Fleadh Cheoil
Netflix has just added an incredibly tense 97-minute thriller
You may also like
1 day ago
Two long-thought-dead Marvel projects appear to be in the works
1 day ago
Nope has the best scary scene in 2022 so far
1 day ago
An underrated John Cena comedy is among the movies on TV tonight
2 days ago
The JOE Movie Quiz: Week 166
2 days ago
A terrific mystery thriller is among the movies on TV tonight
2 days ago
New action drama looks like a must-watch for Top Gun fans
Next Page