We chatted to Batman. IN THE BATCAVE.

In a peak geek-out moment, JOE had the chance to chat Ben Affleck (aka Batman) and Ray Fisher (aka Cyborg), two of the members of the Justice League.

The newly assembled super-group are joined by Wonder Woman, Aquaman and The Flash on the big screen, in order to take down the inter-galactic villain Steppenwolf, who wants to destroy Earth and rule the ruins. 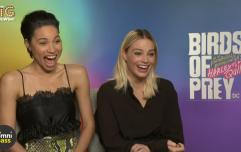 END_OF_DOCUMENT_TOKEN_TO_BE_REPLACED

With the movie picking up from the seismic events that ended Batman V Superman: Dawn Of Justice, the cast had to keep some pretty big secrets to themselves for the last few years, so we had to know how happy they felt now that they could finally openly talk about the plot twists of the new movie.

Also, with Affleck heavily involved in the MMA ("Outside of the ring!", he's keen to clarify) and Fisher famously playing Ali in an Off-Broadway show, how do they reckon the greatest boxer of all time would measure up in today's sporting environment?

And with DC having such a huge back catalogue of amazing super-villains, which ones do these guys figure are the best of all time?

Check out their answers to these and more below:

You can watch Batman and Cyborg and the rest of the Justice League fight to save the Earth on the big screen when the movie arrives in Ireland on Friday 17 November.

In case you've been under a rock the last few months, here's the trailer:

House of Rugby Ireland · Munster's nail-biting win, European games in doubt and Darren Cave interview
popular
QUIZ: Name all the counties of Ireland that contain 3 vowels or more
Recall of Pedigree dog food over safety concerns
QUIZ: Can you correctly identify these European country flags?
The JOE Friday Pub Quiz: Week 226
QUIZ: Can you pass your driving test and guess the meaning of all these road signs?
QUIZ: Can you guess the drink from its can?
Irish punters could turn €0.98 into hundreds of millions* with a bet on the Super Jackpot
You may also like
1 year ago
The director and star of Crawl reveal the hilarious rules about peeing in the water
1 year ago
EXCLUSIVE: Hobbs & Shaw director on the one action scene audiences won't believe was done for real
1 year ago
EXCLUSIVE: Jason Statham on his favourite insults towards The Rock in Hobbs & Shaw
1 year ago
EXCLUSIVE: Idris Elba named his own villainous character in Hobbs & Shaw
1 year ago
EXCLUSIVE: Fast & Furious sequel looks set to film an action set-piece in Ireland
1 year ago
The Lion King director Jon Favreau reveals why one character had some major changes from the original
Next Page