A hero, on and off screen.

Benedict Cumberbatch, known for playing Sherlock Holmes and Marvel's Doctor Strange, has been praised as a hero after rescuing a delivery cyclist from attackers.

According to a report by Sky News, the Oscar-nominated actor was walking with his wife when he saw a cyclist hit over the head with a bottle. Cumberbatch, who is currently starring in the Sky Atlantic drama series Patrick Melrose, yelled "Leave him alone" at the attackers. 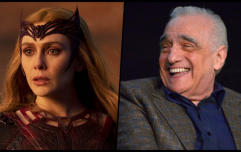 END_OF_DOCUMENT_TOKEN_TO_BE_REPLACED

The 41-year-old actor then rushed towards the incident where he fought off a gang of four attackers who were hassling the delivery man.

Cumberbatch later told The Sun: "I did it out of, well, I had to, you know."

A witness also told the newspaper: "Benedict was courageous, brave and selfless. If he hadn't stepped in, the cyclist could have been seriously injured."

Strangely enough, Cumberbatch is no stranger to dangerous situations — and escaping them. Cumberbatch was a victim of a carjacking in South Africa when he was filming there in 2005, and was tied up by his attackers, but eventually convinced them that it would be a bad idea for them to have a dead Briton on their hands. A good man to have in a crisis, as they say.

popular
Met Éireann issues weather warning for three counties
QUIZ: Take your very best shot in this tough General Knowledge Quiz
The JOE Movie Quiz: Week 160
QUIZ: Can you conquer this delightfully difficult General Knowledge Quiz?
A feel-good comedy with a Springsteen soundtrack is among the movies on TV
New horror movie trailer has one of the best jump scares in years
The JOE Music Quiz: Week 110
You may also like
1 month ago
Benedict Cumberbatch on Doctor Strange 2: 'The intent is for this to be the most scary Marvel film yet'
3 years ago
WATCH: The trailer for Brexit, a new movie starring Benedict Cumberbatch is coming under some criticism
4 years ago
Benedict Cumberbatch's new TV series is a wild booze-soaked journey spanning the decades
4 years ago
Do these pics reveal Nidge is in the new Avengers movie?
5 years ago
During last night's episode of Sherlock, everyone Googled the answer to the exact same question
5 years ago
#TRAILERCHEST: The trailer for the next episode of Sherlock reveals his "most chilling enemy" yet
Next Page