Your options tonight include a Bond flick, a Dublin-set comedy and one of the best sci-fi movies ever.

It's Thursday, so congratulations! You've nearly made it to the weekend.

To celebrate, why not kick back on the sofa tonight and relax with one of these fine films.

The eighth Bond movie and the first to star Roger Moore as 007.

Cameron Diaz, Drew Barrymore and Lucy Liu reprise their roles in this hit sequel to the 2000 action-comedy Charlie's Angels.

Set in Dublin, this comedy-drama follows two female friends whose lifestyle comes under scrutiny when one of them becomes engaged to a teetotaller. Alia Shawkat of Arrested Development fame stars.

Simply one of the best and most mind-blowing sci-fi movies ever. Check it out before the fourth in the franchise is (hopefully) released later in the year.

A high school student finds herself immersed in an online game of truth or dare, where her every move starts to become manipulated by an anonymous community of "watchers." Emma Roberts and Dave Franco star.

Sylvester Stallone writes and stars in this iconic sports film, which won the Best Picture award at the Oscars in 1976. 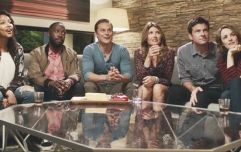 END_OF_DOCUMENT_TOKEN_TO_BE_REPLACED

Directed by Paul Verhoeven of Basic Instinct, Robocop and Starship Troopers fame, Isabelle Huppert was Oscar-nominated for her role as a successful businesswoman who gets caught up in a game of cat and mouse as she tracks down the unknown man who assaulted her.

The Big Reviewski || JOE · Mortal Kombat director Simon McQuoid and new Sub-Zero star Joe Taslim on fatalities and fight scenes
popular
The JOE Movie Quiz: Week 101
RSA confirm online theory tests to come into effect later this month
QUIZ: Can you identify the EU country of origin from these €1 coins?
QUIZ: Can you list the 32 counties of Ireland in order of population size from largest to smallest?
Everything you can do from tomorrow as biggest easing of restrictions in months to take place
QUIZ: Can you identify which of these countries have the colour blue in their flag?
The JOE Friday Pub Quiz: Week 242
You may also like
1 day ago
The first look at Lily James as Pamela Anderson for new series has been revealed
2 days ago
Here are the best movies on TV this evening
3 days ago
Here are the best movies on TV this evening
3 days ago
Cillian Murphy looks terrified in the final trailer for A Quiet Place Part II
3 days ago
WATCH: Stranger Things Season 4 gets a creepy new trailer
3 days ago
Netflix's new thriller Awake puts us in a world where people can no longer sleep
Next Page