It's widely acknowledged that Bill Murray is one of the coolest human beings on the planet.

So the idea of the enigmatic actor being your barman for the night seems like something that would only happen in a very enjoyable dream.

But for those lucky enough to be in attendance at the opening of his son Homer's restaurant in New York last night, it was very much a real thing that happened. 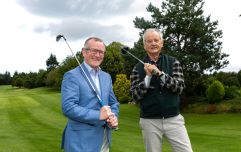 END_OF_DOCUMENT_TOKEN_TO_BE_REPLACED

The Lost in Translation star was serving shots at the swanky-looking 21 Greenpoint in Brooklyn. Initially it appeared that everyone was welcome at the event, as Murray Jr told NY Eater: "People can walk in; just be nice. What my dad lacks in experience, he makes up for in tequila.''

But it probably shouldn't come as too much of a surprise that, as it turned out, rather a lot of people were keen on the idea of drinking tequila with Bill Murray. Before long the restaurant had to put out a statement saying that you'd need a spot on the exclusive guest-list to be allowed entry.

Still, that didn't stop the people who did manage to get in from sharing numerous action shots and clips of the famous man himself. According to NY Daily News the 65-year-old promised 'a shot of vodka every 20 minutes' before starting his shift.

If the Murray family fancy opening a bar in the Ireland any time soon we can assure them that we'll be loyal customers.

popular
5 years ago, Hollywood took a massive gamble on a huge sequel... and lost big time
QUIZ: We bet you can't get full marks in this extremely frustrating geography quiz
Nicola Bulley's phone found by the river 'could be a decoy', diving expert suggests
Woman dies from hypothermia after telling doctor she 'couldn't afford heating'
One of the best crime thrillers ever is among the movies on TV tonight
Amazon Prime Video has just added 21 big movies to its library
An incredibly fun action blockbuster is among the movies on TV tonight
You may also like
4 years ago
Dan Aykroyd on Ghostbusters 3: "It is being written right now"
4 years ago
This Bill Murray movie on Netflix is far better than critics would have you believe
5 years ago
Bill Murray disliked Groundhog Day so much he didn't speak to its director for over 20 years
5 years ago
Bill Murray as Steve Bannon lists the horrifying candidates he has lined up to be the next President
6 years ago
PICS: Paul O’Connell, Huey Lewis, Niall Horan and Bill Murray form the greatest golf foursome of all time
6 years ago
Bill Murray singing the Bare Necessities is the perfect way to round off your week
Next Page