Calling all film fans! You can now star in your very own Fast And Furious stunt scene

Do you feel the need, the need for speed? And stunts? And speed-related stunts?

If you answered yes to any of those questions, then you’re in luck, because we’ve got great news for all film fans, car fans and fans of beautiful people driving around in all sorts of incredible vehicles… you can now star in your very own personalised Fast & Furious 8 stunt scene. 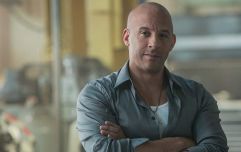 END_OF_DOCUMENT_TOKEN_TO_BE_REPLACED

To mark the release of Fast & Furious 8 in Irish cinemas, Universal Pictures Ireland have created a green screen studio for you to be the star of your very own film stunt scene, placing you in the driving seat of an immersive supercar experience.

The unique experience will arrive in Dublin’s Blanchardstown Shopping Centre on Friday 7 April and stay until Friday 14 April, and will be situated just outside the entrance to the ODEON Cinema. It’s completely free and your personalised video can then be easily shared across Snapchat, Facebook, Instagram, Twitter and YouTube.

You know how you’ve always wanted to tell people “I do my own stunts”? Well, now’s your chance.

Here’s a sneak peek of what’s in store for you...

And here’s Vin Diesel, Dwayne 'The Rock' Johnson and the rest of the Fast & Furious 8 crew showing you how it’s really done…