In this video with Wired, Colin Farrell and Danny DeVito answer the most asked questions about them on the internet, and the results are great.

Although most of the questions that are asked are fairly basic, their answers are certainly not. 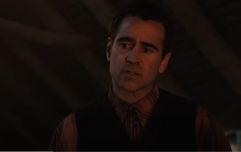 END_OF_DOCUMENT_TOKEN_TO_BE_REPLACED

Speaking about the fact that he auditioned for Boyzone (he sang 'Careless Whisper', by the way) way back when, he said that "Two of the members of the boyband had dead mics and I couldn't even be one of them".

You can only imagine how that went down. DeVito mocked him for being overly Irish, while Farrell himself said that he is exactly "98.7% Irish", according to an ancestry test.

If you haven't had enough of the Dublin man by now, you can catch JOE's interview with him here, where he discusses Dumbo, the saddest movies ever, and It's Always Sunny In Philadelphia.

popular
The JOE Movie Quiz: Week 173
The JOE Friday Pub Quiz: Week 314
7 brand new (and classic) additions coming to Prime Video in October
QUIZ: Only the brightest will conquer this tricky General Knowledge Quiz
One of the most ridiculous blockbusters of recent years is among the movies on TV tonight
The JOE Music Quiz: Week 123
QUIZ: Name the country for each of these non-capital cities
You may also like
2 months ago
WATCH: Colin Farrell - "Our crew said this was the most dangerous movie they'd ever worked on"
3 months ago
WATCH: Colin Farrell could be up for an Oscar in true-life thriller Thirteen Lives
4 months ago
QUIZ: Get ready for a tricky time with this General Knowledge Quiz
6 months ago
There is ANOTHER Irish actor in a major role in The Batman
6 months ago
The Batman finally remembers that these characters are very horny
7 months ago
WATCH: Colin Farrell picks some incredible Irish actors to play future Batman villains
Next Page