We get to see it two months before U.S. audiences.

Neil Cross is very much in demand in TV land right now.

On top of writing episodes for Spooks and Doctor Who, as well as the scripts for horror movie Mama and the upcoming remake of Escape From New York, he is also the writer and creator of the much-loved Idris Elba cop drama Luther. 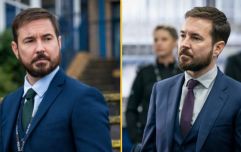 END_OF_DOCUMENT_TOKEN_TO_BE_REPLACED

So when he launches a new project, you can be certain that everyone is going to sit up and pay attention.

Hard Sun revolves around two police officers, played by Jim Sturgess (Fifty Dead Men Walking, Geostorm) and Agyness Dean (Clash Of The Titans, Pusher), who are investigating the death of a hacker and discover that the entire planet is heading towards a certain, unavoidable apocalypse... in five years.

Torn between informing the world that the end in imminent and making the most of the time we have left, while simultaneously plunging civilisation into chaos, the duo find themselves hunted by shady government agents who don't want the news made public.

The show is co-production between BBC and American streaming service Hulu, and our American cousins will get to check it out from Wednesday 7 March.

On this side of the pond, however, the first in the six-episode series will premiere on BBC One tonight at 9.35pm.

Check out the season's teaser trailer below:

popular
QUIZ: How many of these characters from The Simpsons can you name?
Australian woman stuck with Irish accent after tonsil surgery
Two children, aged 3 and 4, hospitalised after consuming suspected cannabis jellies
9-year-old boy killed by lightning strike while playing football
Assassin's Creed director on why Ireland is the perfect setting for their new game
Alastair Campbell accidentally announces death of The Queen live on GMB
Alan Kelly says Taoiseach and colleagues "damn well destroyed this country" with housing policies
You may also like
3 weeks ago
Line of Duty fans think trailer reveals Kate's fate after tantalising final scene
1 month ago
The best theories and responses to Line of Duty Series 6 Episode 1
1 month ago
Louis Theroux announces new Tiger King documentary
2 months ago
Peaky Blinders creator Steven Knight's new show has a great cast
2 months ago
BBC reveals Season 6 of Line of Duty is coming later this month
5 months ago
BBC Radio 1 says it won’t play original version of Fairytale of New York this Christmas
Next Page