RTÉ has released its annual report for the financial year ending 31 December.

860,000 people tuned in to watch Daniel and Majella O'Donnell get their home done up by Demot Bannon on Room to Improve in February last year.

As is often the case, the Late Late Toy Show was the highest viewed programme of the year - racking up no fewer than 1.5 million views.

END_OF_DOCUMENT_TOKEN_TO_BE_REPLACED

Following closely behind were Ireland's Six Nations game against England, and our historic victory over the All-Blacks.

In what is perhaps a more surprising turn of events, the first episode of Dermot Bannon's home improvement show Room To Improve beat out both All-Ireland Senior finals — as did the World Cup semi-final between England and Croatia.

The Papal visit did not feature in RTÉ's 10 most-viewed programmes of the year.

The Irish state broadcaster covered last year's Papal visit, FIFA World Cup and the Presidential election at an overall cost of €7.2million, it was revealed on Tuesday.

END_OF_DOCUMENT_TOKEN_TO_BE_REPLACED

This, combined with depreciation, tax and other charges, resulted in an overall net deficit for the year of €13 million for the broadcaster.

The report also contains a detailed breakdown of where the €160 TV License Fee goes: 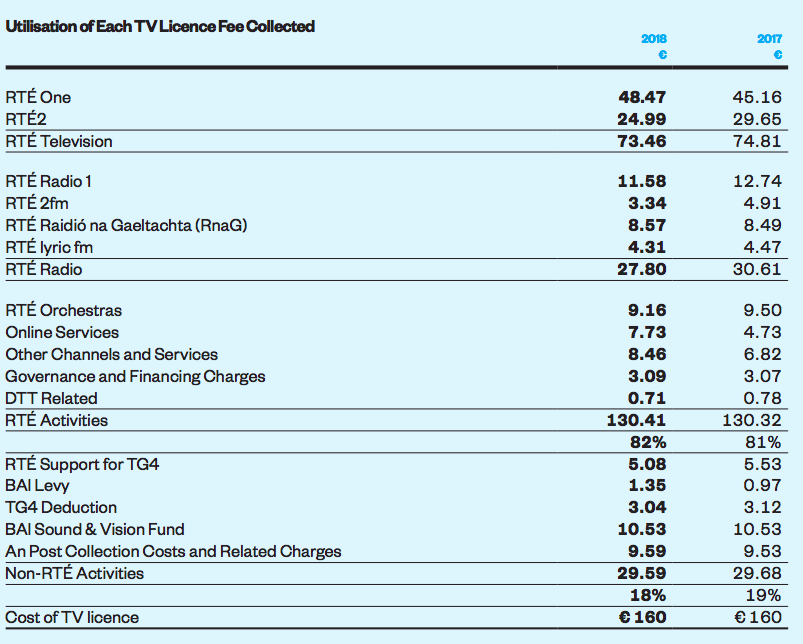 END_OF_DOCUMENT_TOKEN_TO_BE_REPLACED

In a move towards sustainability, the report also confirms that RTÉ eliminated all single-use plastics within its canteen facilities and evolved a compostable option for drinking cups in collaboration with supplier Ballygowan.

Dee Forbes, the Director-General of RTÉ, said: "Despite significant challenges last year, RTÉ continued to deliver on our commitment to captivate Irish audiences across our news and current affairs, sport, factual and entertainment content.

"From our in-depth coverage of Brexit to our round-the-clock output on Storm Emma, which kept the nation fully informed, and from special shared moments, such as the GAA Championship to another outstanding  Late Late Toy Show, there is much that we can be proud of."

Forbes called on the government to provide more funding.

She continued: "TV Licence payers want us to do more and deserve more from us. However, it will not be possible for RTÉ to maintain and enhance what we do and fulfil our remit without action from Government and a solution to the funding of public service media in Ireland."