The movie with Keanu Reeves' best performance turns 20 years old this weekend (no, not The Matrix)

We can probably safely say that Keanu Reeves is never going to win an Oscar.

A lot of folk love him, love his work, but let us be fair here... he is not exactly the world's best actor.

What he does have is an almost supernatural ability to choose exactly the right role to suit his, how do we put this?, stream-lined on-screen skills.

Bill & Ted, Parenthood, Point Break, Speed, The Matrix, The Gift, Constantine, A Scanner Darkly, John Wick... every time we think his career is over, he makes a comeback with a generation defining movie in some way or another.

On the flip side, any time he has been asked to actually act - Dangerous Liaisons, Bram Stoker's Dracula, Much Ado About Nothing, Knock Knock, The Neon Demon - he looks like someone with a fear of water thrown into the deep end and told to do the butterfly.

Across his career, there have been a few occasions were these two circles crossed over in the Venn Diagram of his acting CV, and the best example of this was The Devil's Advocate. 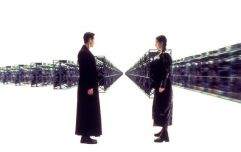 The Matrix 4 is officially happening (Report)

END_OF_DOCUMENT_TOKEN_TO_BE_REPLACED

Released in cinemas in October 1997, Reeves plays Kevin Lomax a small-town, hot-shot, up-and-coming lawyer who is taken under the wing of John Milton (Al Pacino) and his huge law firm, giving Lomax a huge salary, a gigantic Manhattan apartment, and initially Kevin and his wife Mary Ann (one of the first big screen outings for a young Charlize Theron) are over the moon with their new lives.

However (and there was always going to be a big, pulsating HOWEVER), the new job creates a wedge between Kevin and his wife, and the more time he spends with Milton, the more demonic visions Mary Ann witnesses, and the movie becomes the half-way house between a John Grisham novel and The Exorcist.

It is probably Reeves at his wide-eyed, "I don't fully understand what's happening right now" best, and the addition of Pacino at the height of his "HOO-HA!" shouty-ness, and Theron pretty game as the scream queen at the centre of her own horror film.

Added in is the clever, fun script co-written by Tony Gilroy (the writer of the Bourne movies, as well as Star Wars: Rogue One), and the slick, sexy direction by Taylor Hackford (An Officer And A Gentleman, Ray), and the combined result is a movie that ends up being a really fun way to spend your night in.

The Devil's Advocate airs on ITV4 on Sunday 8 October at 9pm.


popular
Met Éireann says there's a risk of snow for parts of Ireland this weekend
QUIZ: Can you guess the pixellated movie posters?
QUIZ: Can you name all these European countries just from their vowels?
Here are Ireland’s favourite takeaways, as per the National Takeaway Awards
Aldi to recruit 550 new staff and implement living wage rate for employees
Dublin pub to host a 'doggy date night' where you can bring your dog to dinner
Man dies after farming accident in Cork
You may also like
7 months ago
The Big Reviewski Ep23 with Asif Kapadia, floppy cowboys & reviews of Toy Story 4, Brightburn & Child's Play
8 months ago
The Big Reviewski Ep18 with star guest Anne Hathaway, John Wick: Chapter 3 review & win a HUGE Infinity Gauntlet
8 months ago
John Wick 3 director says The Matrix 4 is happening
8 months ago
WATCH: Disney reveals Keanu Reeves' character in new Toy Story 4 teaser
8 months ago
Keanu Reeves film season coming to Dublin and Galway cinemas
9 months ago
John Wick Chapter 3 will be the longest film in the franchise
Next Page