Evil Dead, much like the hordes of undead that faced throughout the franchise, simply refuses to stay buried for long.

Since the first movie arrived in 1981, we've had two sequels, a reboot, and a TV series, and now we're getting Evil Dead Rise, which looks to completely turn the horror series on its head.

END_OF_DOCUMENT_TOKEN_TO_BE_REPLACED

Pretty much every movie in the franchise to date has seen the Deadites unleashed in a very isolated area - usually in the middle of the woods - but that won't be the case here.

The movie's official synopsis is as follows:

"A road-weary Beth [Lily Sullivan] pays an overdue visit to her older sister Ellie [Alyssa Sutherland], who is raising three kids on her own in a cramped L.A. apartment. The sisters' reunion is cut short by the discovery of a mysterious book deep in the bowels of Ellie's building, giving rise to flesh-possessing demons, and thrusting Beth into a primal battle for survival as she is faced with the most nightmarish version of motherhood imaginable."

The first trailer for the movie has just been released, and you can check it out right here: 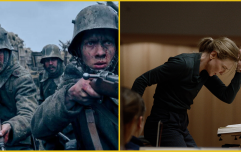 END_OF_DOCUMENT_TOKEN_TO_BE_REPLACED

Behind the scenes, Evil Dead Rise has a very strong Irish connection, as the movie has been written and directed by Lee Cronin, the guy behind 2019's brilliant The Hole In The Ground, which remains one of - if not the - best Irish horror movie ever made.

Interestingly, the new Evil Dead movie looks to be taking the central premise of The Hole In The Ground - a mother trying to protect her child from an evil possessor - and flipping that on its head, too.

Additionally, Irish composer Stephen McKeon - who also worked on The Hole In The Ground - will be scoring the new Evil Dead movie.

Evil Dead Rise arrives in cinemas in Ireland and the UK on Friday, 21 April.