PIC: This woman sent a letter to Fair City about THAT storyline, and it's what every fan is thinking

It's one of the longest running storylines in the Fair City's history, but it's finally showing signs of a conclusion, after a year in the works.

Yes, we are talking about the ongoing storyline of Katy O'Brien and her incarceration by Ciaran.

New episodes of Fair City to return to screens next month

END_OF_DOCUMENT_TOKEN_TO_BE_REPLACED

It annoyed someone so much a few weeks back that they created a petition for the Fair City writers to end the storyline once and for all.

"Last May a girl called Katy O'Brien went missing in a soap called Fair City in Ireland. We eventually found out in September she was being held captive by a masked man and then it was reveled to be the most obvious person called Ciaran. Ciaran was introduced a few episodes just before Katy went missing and almost became part of the O'Brien family. He instantly became part of the community after getting a job off Paul Brennan. We later found out he also rents his own garage where he fixes motorbikes. He also rents a house in Dublin. For a signal man this is a lot of money. Whilst feeding/clothing a girl he's keeping looked up. Anybody who watches the show knows how tedious this is becoming. I could write so much more. Ciaran got a woman pregnant and is living with her and her brain damaged sister who knows about Katy but she can't remember.

"Fair City writers need to end this story as soon as possible!"

But now another fan has gone one further, and emailed Fair City on behalf of her and her Nana to bring the story to an end.

AnnMarie O'Farrell and her Nana have had enough, and they've put it into writing. 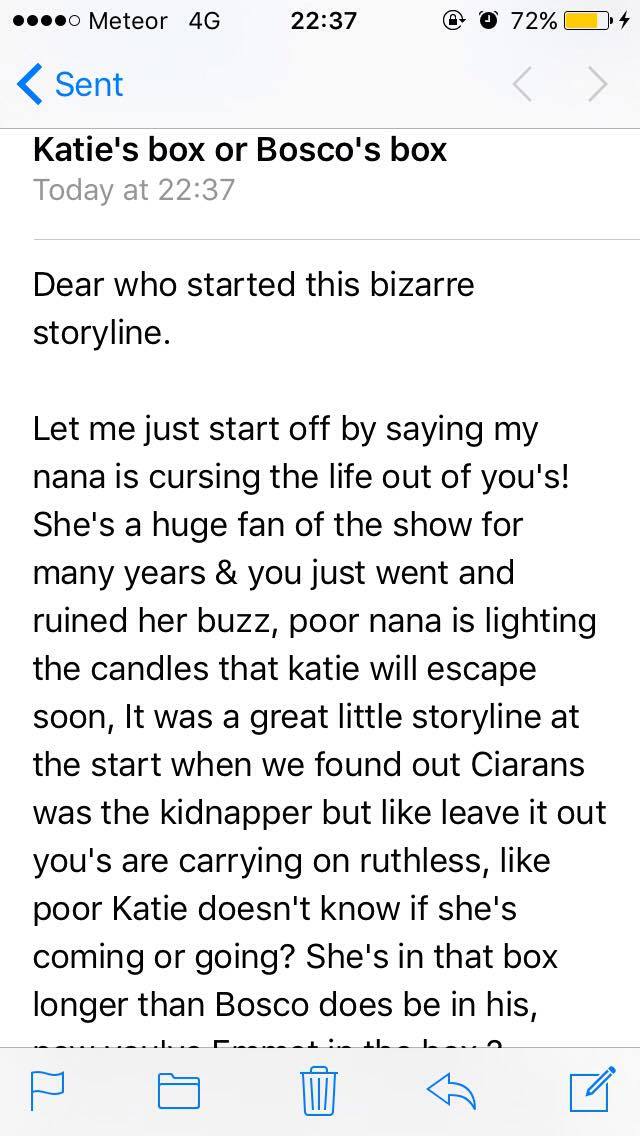 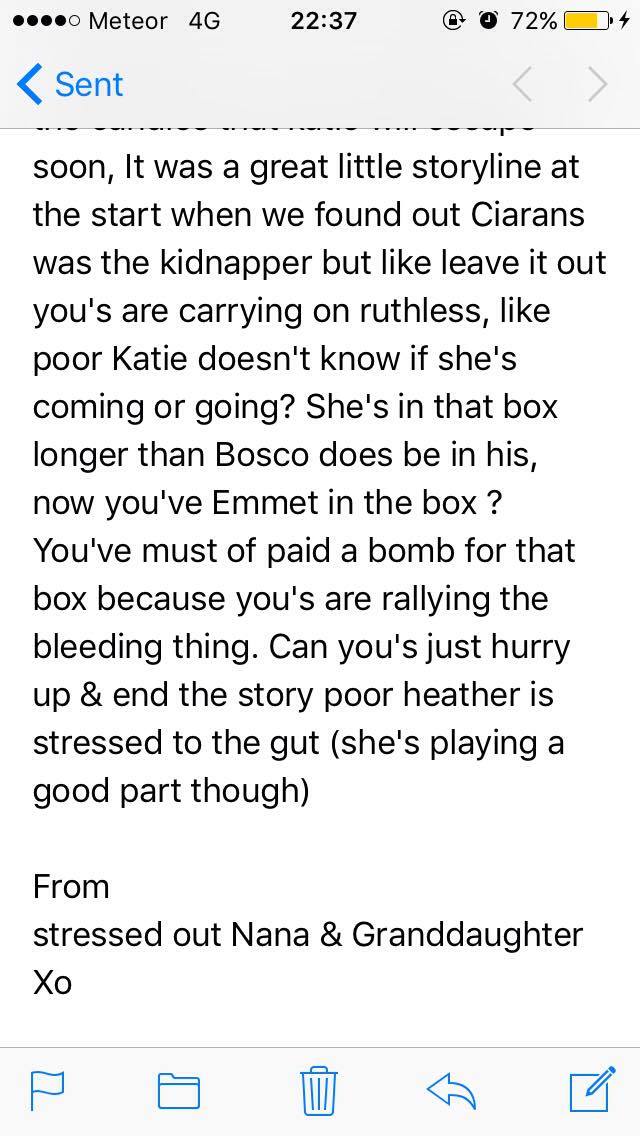 We're sure they're a lot of fans out there who will agree with AnnMarie and her Nana.

Cheers to AnnMarie O'Farrell for sending this our way.
Got a story for JOE? Hit us up on Facebook or Twitter, send it to our WhatsApp number 087-4001102 or mail editorial@JOE.ie.
Advertisement

The Big Reviewski || JOE · The Big Reviewski with Ray Liotta, Goodfellas facts & Tom Hanks making us cry
popular
The 50 most iconic songs of all time* have been revealed
PICS: The man with the biggest penis in the world has one unbelievable problem with it
The five best true crime documentaries to watch on Netflix this weekend
BBC reporter Phil McCann responds after going viral
Melissa McCarthy's most-overlooked comedy is available to watch at home this weekend
Jason Byrne forced to cancel tour dates due to a heart condition
The JOE Friday Pub Quiz: Week 262
You may also like
2 years ago
Fair City will air Karl Shiels' final scenes this evening after sudden death
2 years ago
Fair City are looking for entertainers to take part in a shoot next week
2 years ago
Fair City actor Karl Shiels has died, aged 47
2 years ago
Veteran Fair City actor Tom Jordan has died
2 years ago
QUIZ: Can you name all of these classic Fair City characters?
4 years ago
It's finally over, Fair City fans react as that storyline comes to an end at last
Next Page