And I'll tell you all about it when I see you again...

It was only ever supposed to be a fairly run-of-the-mill Point Break knock-off about fast cars with neon LED lights beneath, racing about in exciting heist situations with luxury items like video recorders at stake.

Eight core films and one spin-off later, the 'Fast Saga' has made almost six billion dollars worldwide. The trailer for the ninth official Fast and Furious adventure dropped recently. It is completely and utterly insane.

END_OF_DOCUMENT_TOKEN_TO_BE_REPLACED

At this point, it couldn't be anything less.

As our own write-up notes, this is the teaser to a summer popcorn event that blows up everything, waves goodbye to gravity and brings people back from the dead. All of these traits are synonymous with the franchise, including miraculous resurrection.

END_OF_DOCUMENT_TOKEN_TO_BE_REPLACED

Even the character of Brian O'Conner, played by the late Paul Walker, is still alive in the universe of the series. We won't see him again for obvious reasons, but he received both a fourth wall-breaking send-off that resulted in cinemas full of crying dudes the world over and a continued legacy in having a smiling newborn named in his honour. One could argue that the name should have been 'Paul' rather than 'Brian', but you no longer seek logic in this arena.

Instead, you dream of outer space. Fast 9 doesn't seem likely to take us there just yet but it is giving us John Cena as Vin Diesel's long-lost villainous brother and we'll gleefully take that for now.

But wait. We're getting way ahead of ourselves. Though we have already constructed a comprehensive power ranking of this bizarre collection, let's try for a quick bite-size summary of each film in chronological order:

The Fast and the Furious (2000, directed by Rob Cohen)

END_OF_DOCUMENT_TOKEN_TO_BE_REPLACED

Can the two put aside their differences to take down the least memorable villain in the series? Yes. Also, Eva Mendes is in this one and is overdue a proper return.

The Fast and the Furious: Tokyo Drift (2006, directed by Justin Lin)

Walker exits. Diesel returns at the end in a then-shocking cameo that helped revitalise a franchise that looked destined for straight-to-DVD hell.

Justin Lin and Sung Kang also show up here and they're more than welcome company. Lucas Black and Bow Wow? Not so much.

In which you start to raise an eyebrow in the direction of the naming conventions for these movies.

Lin brings the original core foursome back together - Diesel, Walker, Jordana Brewster and Michelle Rodriguez - for a solid actioner that doesn't disgrace itself while moving things into slightly more ridiculous territory. Buckle up on that front...

The Rock enters the fray as the Fast Saga embraces chaos, presenting literally unbelievable scenarios in which the characters should 100% be killed yet brush it off like it's nothing against the backdrop of a bright and breezy Ocean's 11-style action-adventure.

It pays off critically and commercially, making almost $300 million more than the previous effort at the box office and ushering in an extremely lucrative future.

This is the turning point. The moment where you plead with your friends to watch the first four because the journey is the destination and the destination is glorious. No film series has the right to not only get good five films in, but to get this good.

What goes up... comes down just a little bit.

The action remains intense and nonsensical. Michelle Rodriguez' Letty returns from the dead. A guy from The Raid shows up. MMA fighter Gina Carano is on board. Gal Gadot and Sung Kang's characters are killed off, the latter of which actually happened in the third movie but the chronological timeline is only now catching up to that one.

Oh, and Jason Statham sets himself up as the next foe.

The second best one. I was going to say the most ludicrous one but honestly it's tricky to narrow that scale down. Still, this is nuts.

Statham is essentially The Terminator, cars fly through buildings, martial arts legend Tony Jaa gets a go, as does Ronda Rousey. The Rock flexes his way out of a cast. Paul Walker, who died tragically before the film's release, receives a highly affecting farewell. Not a dry eye in the house...

In America, this is known as The Fate of the Furious. I think we can all agree that is a much stronger title.

The film itself cannot meet the lofty heights of the previous three, thanks in part to Gray's workmanlike direction, a plot involving Russian separatist mercenaries and an inexplicable babyface turn from Statham, who we need to be a good guy now because...

The first - of many? - spin-off, focussing on the adventures of Hobbs (The Rock) and Shaw (Statham).

Initially adversaries, the two are forced to work together in order to stop Idris Elba's genetically-enhanced assassin and save the very world itself from a deadly virus. Mediocre, obnoxious and greatly profitable. You'll see these two again.

Lin is back. So too is Sung Kang, with the charming Han Seoul-Oh (yes, that's his name) somehow alive and finally paying off the #JusticeForHan social media fan campaign, clearing Statham's villainy off the board and raising about 400 questions in the process.

And there's the general issue of quality control and the fear that the wheels may have totally fallen off this thing and we're just running on empty until that final planned 10th film signals the finish line.

But forget all that, here's JOHN CENA playing a pretty transparent stand-in for The Rock that Diesel can finally get the better of. My head hurts.

This franchise is legitimately incredible. It focuses on a group of underground street racers who, four or five films in, become adept with military-grade weaponry and super-cars to the point that they are actively recruited by government agencies and granted a James Bond-esque licence to kill.

By the time you get to the eighth main instalment, everyone is effectively superhuman, powered as they are by an addiction to adrenaline, the all-encompassing love of family and sweet, honey-hued Corona Extra.

There is an argument to be made that the Fast Saga is actually a notably progressive one; elevating actors and characters of colour, working proud cultural heritage into the story and making genuine attempts to eschew gender stereotyping or isolation thereof.

That said, this is still a series in which unnamed women are scantily-clad props and prizes at races, Gal Gadot's posterior helps move the plot along in Fast Five, the camera lingers on Game of Thrones' Nathalie Emmanuel like an obsessed fan and Jordana Brewster isn't allowed to play anymore once her on-screen husband sails off into the sunset, though she looks to be involved again in Fast 9.

They also throw around the term 'Race Wars' for a big racing event so... yeeeeah, maybe keep working towards a more inclusive future for everyone, Fast Saga.

At least the top line stars - Diesel, Rock, Statham - can agree on one thing. According to a report in the Wall Street Journal last August, the trio have creative control over their fight scenes, with no one actor permitted to gain more onscreen punishment over the other. Not since the glory days of Hulk Hogan in WCW has such backstage politics sounded so hysterical.

Speaking of hysterical, 'See You Again', the aforementioned Paul Walker tribute song courtesy of Wiz Khalifa and Charlie Puth, has taken on a rich emotional life of its own.

The track holds the distinction of becoming the first hip hop song to soar past one billion views on YouTube, while it has taken on such prominence in pop culture that Khalifa and Puth performed it during the Los Angeles Lakers' recent tribute to late basketball star Kobe Bryant.

Clip via House of Highlights

The connection doesn't end there, not when there are well-meaning but peculiar memes like the following busying their way around the Internet: 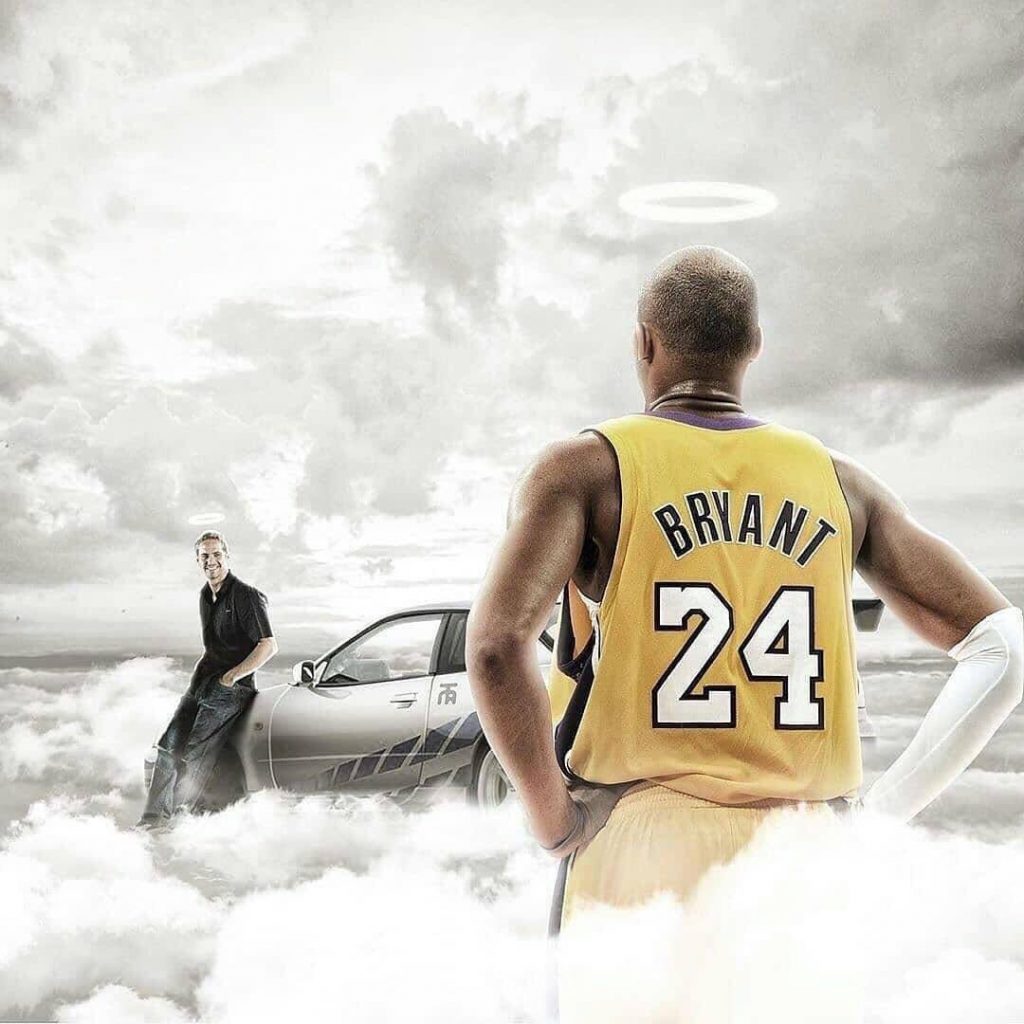 Back to the song for a moment. Puth, something of an unknown at the time of its construction, was forever changed by the experience.

"I wasn't supposed to be on the song; I was only supposed to be a writer on the song. I was a brand new artist, I wasn't cool enough to be part of the franchise yet, I wasn't big enough, but I proved everybody who was close-minded wrong. Everyone on my record label stuck beside me and my management.

"I'll never forget I ended up calling them from around this big conference table on the phone, and they were explaining the reasons why it was going to be sung by this artist and blah, blah blah, I'm not going to name any names, but... I said, 'That's great. Your movie comes out in a week and I'm not gonna give you the song.' And I hung up the phone and when I said that miraculously I was in the music video."

A man who clearly lives his life a quarter mile at a time.

For the rest of us, we live vicariously through a modern cultural phenomenon that nobody quite saw coming, one that you either go full throttle with or get left in the dust entirely.

I'm going to stop making car-based metaphors now. Trust me on this if nothing else; if you've never seen these films, marathon them one-by-one. Doing it all in one day is probably a fool's errand but, then again, this is the greatest soap opera of our time and must be respected as such.