No spoilers here, we promise!

Listen, Game Of Thrones is a huge undertaking. A massive project beyond comprehension for most. 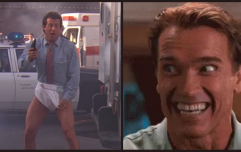 END_OF_DOCUMENT_TOKEN_TO_BE_REPLACED

So many moving parts, so many intricacies that most of us will never truly know, because they all work so seemlessly to give us one of the greatest TV shows ever made.

However, when a mistake does happen, it is going to stand out here more than ever, not just because there are usually so few of them, but because this is a fantastic land, presumably set some time in the "past".

Which is why - during Season 8 Episode 4, titled "The Last Of The Starks" -when viewers spotted a coffee cup sitting on the table behind Jon Snow and kind-of-but-not-really in front of Dany, everyone clocked it immediately.

So this is where we're at now! A Starbucks cup! #GameofThrones pic.twitter.com/dhWXyDo15w

You're telling me they had TWO YEARS to put together a decent show and they couldn't even spot the goddamn Starbucks cup in Winterfell??!?! #GameOfThrones pic.twitter.com/8opg7nyydv

For those of you who didn’t think the Starbucks cup gaffe was real, I went back to watch it and—#GameOfThrones pic.twitter.com/xNz2iBHySH

On the plus side, it is good to know that Starbucks have expanded their empire into Westeros.

popular
One of Liam Neeson's best ever performances is among the movies on TV tonight
Doctor Strange actress Zara Phythian receives 8 years for child sexual abuse
Eurovision producers reveal "irregular voting patterns" during Saturday night's final
The six Eurovision countries with "irregular voting patterns" have been revealed
Irish Rail will no longer provide on-board snack options for foreseeable future
The 50 most iconic songs of all time* have been revealed
Netflix has just added 11 big movies to its library
You may also like
5 months ago
Cow escapes field, heads to resort and gets stuck on water slide
7 months ago
Drunk man reported missing ends up joining search party to find himself
8 months ago
WATCH: The interview between Niall Horan and Lizzo is an absolute flirt-fest
8 months ago
Why improv comedy is the exact night out we all need right now
1 year ago
Adam Sandler reunites with IHOP hostess who turned him away
1 year ago
Shrek fan notices X-rated Easter egg that we all missed as kids
Next Page