Going to the cinema by yourself is the best, and this is why

Not always! But sometimes...

It is time to put this to bed.

As a movie journalist, as a previous cinema employee, this writer has experienced the ultimate highs and lows of cinema-going.

When it comes to actually reviewing the movies, there are special screenings put on that a select few are invited to at a time, but these are usually on at 10.30am in the morning. Going to see a truly scary horror movie, or a truly funny comedy, isn't something that lends itself to the earlier hours of a rainy Monday morning, but this isn't exactly digging at the mines, so we're not going to complain.

On the flip-side, there are weekend or evening screenings, that are packed out to the rafters with competition winners. Recently, there was an Irish premiere screening of a big animated movie, and a child to my right was holding the toy version of the character on screen, and any time they appeared, the child pushed a button on the toy, so it noisily quoted a famous line from the movie. I wondered if the child's parent might ask them not push the button while the movie was on, but the parent was busy playing a long game of Candy Crush, with the screen on full brightness, and the sound not turned off. So... I guess not.

No, there is a true level of happiness to be found right in between those two extremes, and it involves you going to the cinema by yourself.

Mid-week is usually the right time (weekend, everyone is off, and the cinemas will be fuller all day), and just after mid-day. Before the cinemas start to get busier when work/college/school is done for the day, but not so early that the screen is completely empty. You still want to be able to hear other people laugh at the jokes, scream at the scares, cry at the sad bits. 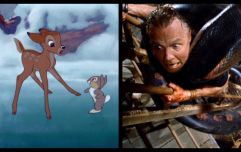 END_OF_DOCUMENT_TOKEN_TO_BE_REPLACED

It is also cheaper to go at this time of the day, which is also a big plus, obviously.

But why go alone?

Well, a few reasons, really. Less distractions, for one. Nothing can take you out of a movie faster than the person sitting next to you suddenly moving, or making a noise. Going to the cinema on date-night can be pretty great, so we're not saying that should be knocked on the head entirely, but it doesn't hold a candle to going by yourself, in a two-thirds empty screen.

You get to absorb the movie on your own levels, process it by yourself, react without interruption. Going to the cinema alone is the secret fourth entry of "Dance like no-one is watching, sing like no-one is listening, and love like you've never been hurt".

But really, the great big plus of going to the cinema alone is just the proof that you can. There are very few social activities that can be enjoyed solo over a prolonged amount of time. But solo cinema-going, nobody will bat an eyelid, as you get lost in whatever you're watching, and laugh or cry or jump in fright in a room full of strangers, with enough distance between you to feel comfortable, but not so much that you can't look around and say to them and yourself "Did you SEE that??"


popular
The JOE Friday Pub Quiz: Week 175
The shortlist for the best breakfasts in Ireland has been revealed
Bodies of three children discovered in Dublin home
The 50 most iconic songs of all time* have been revealed
QUIZ: Can you guess the pixellated movie posters?
Two operators of illegal puppy farm in Roscommon convicted of animal cruelty
21 jokes that are so bad they're actually brilliant (but still quite bad)
You may also like
6 hours ago
HBO's new all-star murder-mystery series The Undoing isn't giving much away
8 hours ago
Jon Stewart's new political comedy Irresistible couldn't come at a better time
10 hours ago
Future of Tipperary cinema and jobs secured due to Omniplex acquisition
14 hours ago
Here are the 8 best movies on TV this Friday
1 day ago
Star Trek: Picard mostly manages to boldly go where no Star Trek show has gone before
1 day ago
COMPETITION: Calling all Star Wars fans! Win a €50 #D350 Fan Zone voucher & limited edition Star Wars Saga Coin Sets
Next Page