The return of Saturday Night Live this weekend was full of momentous moments.

Ryan Gosling was there to promote Blade Runner 2049, but he kicked off the show by telling the audience that he single-handedly saved jazz music, before being joined by Emma Stone who corrected him, because she too saved jazz from extinction.

Jay-Z was the musical guest for the night, and he weighed on in the NFL/Trump situation with his performance, while Alec Baldwin also returned to play the President, and the show tackled Trump's complete lack of action over the Puerto Rico crisis. 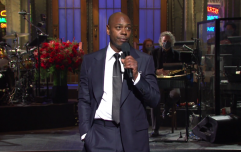 END_OF_DOCUMENT_TOKEN_TO_BE_REPLACED

But even with all of that, this episode seemed to have one goal in mind: make Ryan Gosling laugh.

Gosling has a bit of a habit of not being able to keep it together on the show, like this time he played an alien abductee the last time he hosted the show in December 2015, and his co-star Kate McKinnon (now best known from the likes of Ghostbusters and Rough Night) continued to crack him up time and time again.

This time though, it feels like the writers at SNL did their absolute best to make sure than Gosling had no hope of not breaking character and giggling all the way through.

He plays a fugitive, hiding out in a chicken coop, with a giant hen who he may or may not have fallen in love with. The cops are close on his tail, and ..... you know what? You're probably just better off watching it, because explaining it isn't doing it any justice.

See? What even was that? 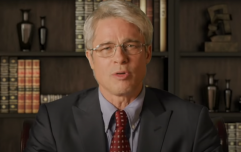 END_OF_DOCUMENT_TOKEN_TO_BE_REPLACED

Aside from being hilarious, obviously.

All Clips via Saturday Night Live

The Big Reviewski || JOE · TBR Spotlight: The Falcon and the Winter Soldier Episode Four - 'The Whole World is Watching'
popular
Beware of the very clever WhatsApp hack that is locking Irish users out of their accounts
Reeling in the Years was watched by over half a million people last night
Staff shouldn't be pressured to return to workplaces says Leo Varadkar
Line of Duty fans think they've worked out who Jo Davidson's mystery relative is
Motor insurance costs set to fall from June after changes to payout guidelines
Stephen Donnelly responds to inquest into his lack of Twitter mentions
Thunder Force review: somebody needs to stop letting Melissa McCarthy's husband make movies
You may also like
1 year ago
WATCH: Jason Momoa was properly hilarious as a gigolo on Saturday Night Live
1 year ago
WATCH: Saturday Night Live have boldly attempted a Love Island sketch starring Phoebe Waller-Bridge
1 year ago
Saturday Night Live fire Shane Gillis for using racial slurs
1 year ago
Reaction to Sinéad O'Connor on Late Late shows we still have a long way to go on empathy and mental health
1 year ago
WATCH: Emma Stone stars in one of Saturday Night Live's funniest sketches in years
2 years ago
WATCH: Pete Davidson compares R. Kelly to the Catholic church
Next Page