In terms of the premiere dates for various seasons of Peaky Blinders, the BBC hasn't exactly been consistent :

END_OF_DOCUMENT_TOKEN_TO_BE_REPLACED

Well, after that epic trailer was released a few days ago, it appears that we're very close to the return of Tommy Shelby and the Peaky Blinders gang.

Yes, that's right. No more waiting because Peaky Blinders is back very soon, according to Cillian Murphy.

Murphy's latest film, The Party, was recently screened at the London Film Festival and the Irish actor was in attendance to walk the red carpet and answer a few questions. In an interview with ODE, the star of Dunkirk and 28 Days Later was asked about the upcoming season of Peaky Blinders.

"I think it will be the best (season). It's pretty powerful, we've got lots of surprises. It's soon, it's November I think."

At present, no official release date has been given by the BBC but they have been providing a few more images ahead of its release.

Here's a first look at the character that Irish actress Charlie Murphy will be playing in the show. 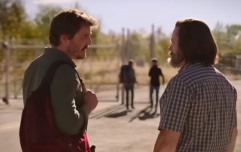 END_OF_DOCUMENT_TOKEN_TO_BE_REPLACED

We also recently learned that Adrian Brody will be playing the leader of "a gang of Italian-Americans" and that he's going to be the "biggest threat" yet to the Peaky Blinders.

While no official premiere date has been given, Season 4 will kick off when Tommy receives a mysterious letter on Christmas Eve and he realises that the Peaky Blinders are in danger of annihilation. As the enemy closes in, Tommy flees his country house and returns to the streets of Small Heath, Birmingham where a desperate fight for survival begins.

Here's Cillian Murphy's most recent interview with ODE along with that blistering trailer.

Be honest, you're going to look at it again!