Yeah, so this is kind of a big deal…

How would you like to lounge around with Ron Burgundy drinking more than your fair share of scotchy, scotch, scotch, while doing ‘thousands’ of arm curls every single day? Well, now you can… sort of.

Anchorman 2: The Legend Continues hits Irish cinemas on December 20 later this year and to mark the occasion the guys from MovieReplicasDirect.com have announced that a 13in talking Ron Burgundy action figure is to go on sale. 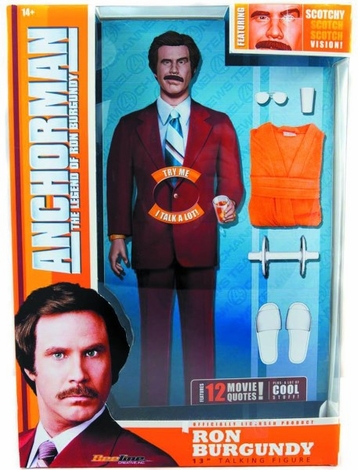 END_OF_DOCUMENT_TOKEN_TO_BE_REPLACED

You can pre-order the action figure for $44.99 (€33) and according to the product description “this figure will tell you that 'It's kind of a big deal’ and other words of wisdom as only Ron Burgundy can!” It comes equipped with a scotch glass, lounge gear, a set of sunglasses and a dumbbell.

While you can pre-order the action figure now, sadly, it won’t be shipped out until January 23, 2014.

popular
Man arrested following discovery of a body in apartment in Dublin
QUIZ: Can you score 12/15 in this difficult General Knowledge Quiz?
QUIZ: Can you name the movie from a single image?
Family of Ashling Murphy share heartbreaking tribute at Fleadh Cheoil
Weather advisory issued as temperatures in Ireland set to soar again
The JOE Movie Quiz: Week 166
QUIZ: Test your skills to the limit with this General Knowledge Quiz
You may also like
3 days ago
WATCH: The trailer for The Banshees Of Inisherin has arrived
3 days ago
Netflix has just added 20 huge movies to its library
3 days ago
An "unadaptable" adaptation and 8 more new movies & shows to watch this weekend
3 days ago
REVIEW: Thanks to a low bar, Prey is the best Predator movie since the original
4 days ago
Netflix reveals full line-up of new shows and movies arriving in August
4 days ago
Amazon Prime Video has just added 27 big movies to its library
Next Page