In terms of its unique place in the history of broadcasting, Irish people are right to feel an immense sense of pride when it comes to the Late Late Show.

Not only is it the world's second longest-running late-night talk show, after the American The Tonight Show, but over the decades, the Late Late Show has discussed, shaped, and challenged some of the major cultural, social, and political issues of the era.

For example, moments like Gay Byrne daring to talk about contraceptives, the interview with three of The Birmingham Six, and Padraig "Pee" Flynn's notorious interview in 1999 are all defining moments in the Irish zeitgeist.

All this without mentioning The Toy Show and the plethora of memories that the nation's favourite TV special has provided.

Even in more recent times, the Late Late Show continues to have an important role in discussing the major issues that concern Irish citizens - Dara Ó Briain nailing the ignorance of some British people over the border and Brexit being a fine example - but the show is not without its critics.

Despite the fact that it's rightfully regarded as an Irish television institution, Ryan Tubridy is aware of the need for the show to innovate and move with the times. 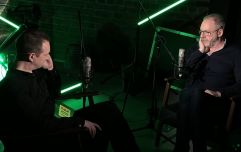 Liam Cunningham on what he'll miss most about Game of Thrones

END_OF_DOCUMENT_TOKEN_TO_BE_REPLACED

During a recent chat with Dion Fanning on the second episode of Ireland Unfiltered, Tubridy discussed some of the changes that he would like to implement during his tenure as host of the show.

Of course, any major production changes and decisions are made by the producers of the Late Late Show but Tubridy was more than happy to discuss his future and what he'd like to see implemented.

"I was never a man for what-iffery. I'm quite stoical about taking it on the chin and this is what it is. Where will I be in ten years time? Will I be presenting the Late Late Show? I don't know. That's a non-answer, but it's all that I've got for you at the moment because it's in the gift of others."

With regards to changes that he would like to see on the show, here's what he had to say:

"The TV is slightly restrictive because it's all about camera and the size of the audience. It's a completely different medium to radio. Doing the radio show feels like it's going down to your kitchen table with some tea and toast and just saying' what's going on?' but with 330,000 people listening."

On this note, Tubridy would like to see the Late Late Show incorporate some of the attributes that shape his radio show.

"I'd like to warm it up if I can and take it (Late Late Show) somewhere that's a bit more me, but I don't know if the viewers want that and I don't know if TV is wide enough to accept a little bit more freeform content. I'd probably do longer form interviews - if I had a bit more time. I'd probably consider trimming the show, if possible. That's not necessarily going to happen today or tomorrow. I'd just do things that would allow me to be a bit more like my radio personality."

You can listen to the second episode of Ireland Unfiltered in its entirety by simply clicking here, you can watch it here on JOE.ie’s YouTube channel, and you can use #IrelandUnfiltered to join the conversation on social.

Ireland Unfiltered, brought to you in partnership with Carlsberg Unfiltered, will be available everywhere you get your podcasts and on YouTube every Tuesday


popular
The JOE Friday Pub Quiz: Week 180
QUIZ: Do you know your dashboard warning signs?
Met Éireann issues status red marine warning ahead of the arrival of Storm Jorge this weekend
Here are the 11 best movies on TV this Friday
QUIZ: Can you guess the pixelated album cover?
The line-up for this week's Late Late Show is here
The most popular baby names in Ireland in 2019 have been revealed
You may also like
3 months ago
Jack Whitehall on dealing with the "posh guilt" that came with his upbringing
3 months ago
COMPETITION: Win four tickets to Republic of Ireland v Denmark
4 months ago
Joe Brolly: "The DUP is about narrow self-interest"
4 months ago
'I was told Joanne Cantwell had lost confidence in my abilities as an analyst'
4 months ago
Here's how to get tickets to Ireland Unfiltered Live with Joe Brolly
4 months ago
There will be no price to pay for loyalty of the EU, according to Paschal Donohoe
Next Page