Ed Sheeran slept on Jamie Foxx's sofa for six weeks before he was famous. The Oscar winner also had a great tale about meeting Kanye West.

Jamie Foxx lifts the lid on what it's like to have Ed Sheeran as an accidental housemate.

Speaking on the Graham Norton Show, Foxx says that both men met each other during a radio show in LA, and after taking a shine to the musician, Foxx was more than happy to give Sheeran some help as he tried to break into the industry.

END_OF_DOCUMENT_TOKEN_TO_BE_REPLACED

After bringing Sheeran to his house and hearing him play, Foxx remarked, "He's incredible and I'm like, 'I know you've got nowhere to go but I'm like chill here.' I'm giving him food because I'll always champion an artist. I said 'I think you've got the goods but I need to check you out,' so I took him down to this show that I was doing every Monday in LA. There was like 800 black people. All black. Just like the best musicians in the industry and everyone was black. Black!'.

Foxx adds: "All of a sudden, I'm like 'Here's Ed Sheeran,' and he pops out with his little red hair and ukulele. One of my homies - who's this incredible guitarist but he's true to the music - is saying to me 'Foxx come on man. What are you doing the room!' He (Sheeran) went out with this ukulele and got a standing ovation from the entire room and the rest was history." 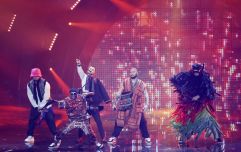 END_OF_DOCUMENT_TOKEN_TO_BE_REPLACED

If you're looking for even more proof about just how selfless Jamie Foxx is when it comes to helping the careers of other artists, this anecdote about his first meeting with Kanye West should do it.

Granted, he didn't quite see Kanye's talent at first, but the fact they collaborated on Gold Digger is further evidence that Foxx is one of the coolest men in Hollywood.

popular
Two new 24-hour bus services are coming to Dublin
Power-ranking the House of the Dragon characters after THAT big fire
Jeffrey Dahmer’s dad thinks he knows what’s to blame for son becoming a serial killer
QUIZ: Test your knowledge with this Ultimate Friends Character Quiz
€600 energy credits and free schoolbooks for children set to be announced in Budget 2023
An underseen disaster film is among the movies on TV tonight
Gardaí in Mayo make arrest in investigation into the death of Joseph Deacy
You may also like
1 week ago
The JOE Friday Pub Quiz: Week 312
2 weeks ago
The JOE Friday Pub Quiz: Week 311
2 weeks ago
Drugs, dancing, and drenchings: Confessions of an Electric Picnic attendee
3 weeks ago
Here are the stage times for Electric Picnic 2022
1 month ago
The JOE Friday Pub Quiz: Week 309
1 month ago
QUIZ: Can you identify the famous song from the opening line?
Next Page