Jennifer Aniston has her say about *that* controversial Friends theory

"Maybe it could have happened."

You may remember coming across a Friends theory which pointed out the reasons why Rachel should have chosen Joey over Ross in Friends.

A Twitter user by the name of @kaneandgriffin came up with a 100-point thesis as to why Rachel and Joey should have been the will-they-won't-they couple instead of Rachel Aniston and David Schwimmer's characters. 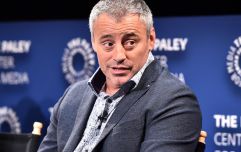 END_OF_DOCUMENT_TOKEN_TO_BE_REPLACED

Well, Jennifer Aniston has had her say on the famous Twitter thread.

It was an argument that tore people apart on social media and while some were quite happy with the possibility of Joey being Rachel's one true love, others were absolutely disgusted at the thought.

The thread pointed out the fact that Ross branded Rachel as 'his' and couldn't stand her being in direct contact with any other male.

Joey, on the other hand, was always supportive of Rachel and even let her share his apartment when she was pregnant with Ross' baby.

In an interview with Elle, the actress was quick to squash any doubt in fans' minds that Rachel and Ross weren't the ideal couple for the show.

When asked if there was "any chance you secretly wish Joey and Rachel had made it?" Aniston said:

"No! No, no. They tried! I think there was a moment when Joey and Rachel got together that, maybe it could have happened, but it didn't.

"It was Ross and Rachel all the way. I really believe that if there's an afterworld of Friends, they're still thriving. Don't you?

"I just don't think Joey and Rachel could have made it. I think it was more physical than emotional with them. They were friends with benefits, and they left it at that."

It was always going to be Rachel and Ross. See, he's her lobster.

The Big Reviewski || JOE · The Big Reviewski with Ray Liotta, Goodfellas facts & Tom Hanks making us cry
popular
Revolut finally rolls out feature which allows users access wages before payday in Ireland
Kings of Leon announce first Irish shows in five years
One of the most-anticipated movies of the last few years is finally available to watch at home this week
Seven people hospitalised after huge fight at Tuam cemetery
Daniel Craig leads the charge on this week's line-up for The Late Late Show
Retail billionaire calls on unvaccinated people to be banned from shopping centres
There's some lovely weather in store this weekend, but better make the most of it
You may also like
3 months ago
Matt LeBlanc has seen the memes of him as every Irish auld lad and very much enjoyed them
3 months ago
The Matt LeBlanc as every Irish auld lad meme has gone global in a big way
3 months ago
Twitter users declare Matt LeBlanc meme "ruined" after Simon Harris joins in with Fine Gael joke
3 months ago
QUIZ: Test your knowledge with this Ultimate Friends Character Quiz
3 months ago
Five huge highlights from watching Friends: The Reunion
4 months ago
Irish viewers will be able to watch Friends: The Reunion the same day it airs in the US
Next Page