JOE reviews Last Vegas - It's like xanax, but a film

There’s a lot to be said for movies aimed at a more mature audience – from a financial standpoint at least.

In a world where box office is dominated by opening weekend grosses, those aforementioned flicks aimed at a predominately older crowd are slow burners – taking in consistent cash week after week as opposed to peaking in the first few days of release.

Last Vegas has done solid business in America, mainly on the back of its stars: Morgan Freeman, Kevin Kline, Robert De Niro and Michael Douglas. Not that singularly any one of them are box office anymore, but they’re still legends and the prospect of all these men in the same movie is a mouthwatering one.

Off the bat, Last Vegas isn’t very good. It’s certainly nowhere near as entertaining as its leading men deserve and the best bits (if you could call them that) are all in the trailer. Y’know, lines of dialogue like “We’re gonna party like it’s 1959”, shit like that.

Somewhat surprisingly given his less ostentatious stature comparative to his co-stars, Kline, who utters that awful line, is easily the best thing about this film; the one laugh out loud moment coming via an obviously improvised line that while feels tonally a little different than everything before it, is nonetheless a welcome laugh in a film with few of them. 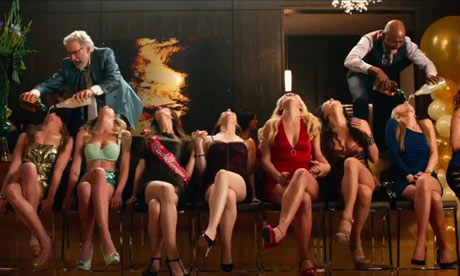 END_OF_DOCUMENT_TOKEN_TO_BE_REPLACED

'The Hangover for geriatrics' has been mentioned numerous times as a clear indication of plot; that’s tough to argue with given the setting. But what Last Vegas really wants to be is a mature, less crass version of Old School. Obviously it fails miserably, but the misjudged, underwritten subplot involving Kline’s quest to get a young woman to play with his wrinkle wood is probably the strangest – a damn shame given Kline’s superb comic ability too.

As for the rest of our cast, Freeman, the oldest member of the group, is pretty pointless while De Niro and Douglas have the closest thing to a storyline. Both spark off each other very well, but the balance of dramedy again never quite works and the film fizzles as a result. .

It’s not awful, this cast is far too good for that, but it’s a hugely missed opportunity and, at points, horrifically bland comedy that is slim on laughs. Next time you wanna party like it's the late '50s, bring Don Draper.


popular
Downton Abbey creator confirms plans to start work on a sequel
QUIZ: How many of these Recess characters can you name?
QUIZ: How many of these characters from Breaking Bad can you name?
Disney+ has brought forward its launch date in Ireland and confirmed its price
The 50 most iconic songs of all time* have been revealed
WATCH: Trailer released for CG remake of Pokémon: Mewtwo Strikes Back
There’s a massive battle rap event happening in Dublin next month
You may also like
1 day ago
Dublin's Olympia Theatre to host Bohemian Rhapsody and The Greatest Showman sing-a-longs
1 day ago
Here are the best movies on TV tonight
2 days ago
The JOE Movie Quiz: Week 37
3 days ago
Here are the brand new TV shows you'll be addicted to in 2020
3 days ago
Here are all the best movies on TV today
3 days ago
David Attenborough's spectacular new documentary will be shown in Irish cinemas with a Q&A after
Next Page