Former Ireland and Leinster head coach Joe Schmidt was a guest on The Late Late Show on Friday night as he promoted his autobiography.

Following Ireland's disastrous World Cup showing, he joined Tubridy in studio to talk about his time with Ireland. 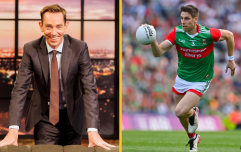 END_OF_DOCUMENT_TOKEN_TO_BE_REPLACED

He admitted he was nervous returning to Ireland to see what the public reaction would be, considering Ireland entered the tournament as the number one team in the world and left following two defeats, one of them being 32 point hammering to New Zealand.

"I was disappointed. I didn't really want to meet people and have them disappointed as well," Schmidt said.

"You know when you get off the flight you're going to walk straight into cameras that are at the airport. We'd been up at 3am to catch our flight and I didn't really catch our flight.

"You get in - and I'm not sure what I said in the interview now - but you're probably not at your peak. 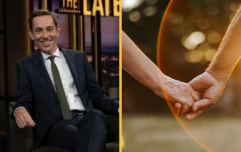 END_OF_DOCUMENT_TOKEN_TO_BE_REPLACED

"I did hide away for a while. And my wife said let's get out of town then. We went to Spain for a few days which was great."

As the interview was winding down, Tubridy had one more ace up his sleeve.

He brought out an old friend who had soldiered for Schmidt down through the years, and the Kiwi loved it.