“You couldn’t write it, you really couldn’t.”

We’ve all definitely said or thought this line at some point while watching a film – there’s just no way a real person is in any way as heroic/romantic/stupid/stupidly heroically romantic as the fictional character we’re watching on screen.

END_OF_DOCUMENT_TOKEN_TO_BE_REPLACED

It turns out that truth is actually stranger than fiction, as novelists, scriptwriters and directors have, for years, used real people from their own lives as the inspiration for some of cinema’s most iconic characters.

And so this week JOE decided to pick our Five Favourite Famous Film Characters Who Were Amazingly Inspired By Real People.

It makes sense when you think about it really. Why go to the bother of struggling to make up content when you can just watch your weird brother, observe your bonkers best friend, or spy on your freaky neighbour to help you come up with a ‘genius’ character.

All it takes is a little bit of creative license here, or a slight reimagining there, and before someone can say “I’m going to sue you for clearly basing that vile character on me,” you’ve got a Hollywood favourite on your hands and you’re laughing all the way to the bank.

Laughing until you actually get sued of course...

END_OF_DOCUMENT_TOKEN_TO_BE_REPLACED

And no, we’re not going to include Jabba the Hutt either, even though we reckon his slimy, S&M obsessed character was possibly inspired by some girl George Lucas met on a night out in Coppers years ago. Or we could just listen to the professionals do it:

Brilliantly portrayed by Harrison Ford in three crackin’ films – Raiders Of The Lost Ark, Temple Of Doom and The Last Crusade  (we don’t speak of the fourth one) – the iconic fedora-doffing, leather jacket-wearing archaeology professor turned action adventurer was actually based on an amalgamation of real life people.

Created by George Lucas as an homage to the heroes of 1930s matinée serials, Indy’s origins were also rooted in Charlton Heston’s Harry Steele character from The Secret Of The Incas (1954). 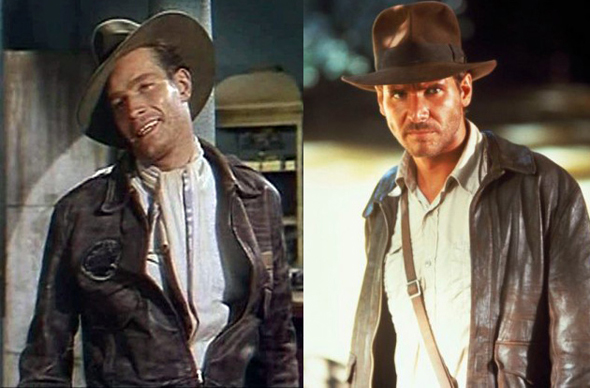 More specifically though, it seems that everyone’s favourite bullwhip-crackin’ lecturer could have been primarily based on real life explorer Hiram Bingham III, a Yale University professor, historian, and explorer, who rediscovered and excavated the lost city of Machu Picchu.

Here at JOE we don’t mind how many people Indy was actually based on, what we really want to know is how the heck did Professor Jones manage to get so many days off during term time to travel around the world being an amazing Nazi beater-upperer? There’s just no way he’s got any days left for holiday...

Bond was beginning to regret supergluing his gun to his face

The British Secret Service Agent, code name 007, is undoubtedly the most famous superdeedooper, sexy, suave spy out there and was created by Ian Fleming in 1953, appearing in twelve of the author’s novels.

Although the agent’s adventures and fellow characters were fictional, a number of elements of Bond’s background were taken from real people or events that Fleming had come across in his own life.

In fact, the author actually wrote the first Bond book, Casino Royale, at his Goldeneye Estate in Jamaica in 1953, exactly the same time that future Bond Pierce Brosnan would have been running around Navan in his wee nappies. 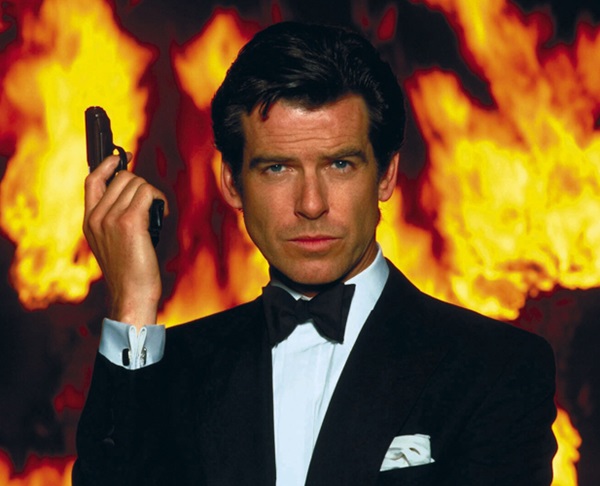 Fleming actually took the name for his hero from a real life ornithologist called, well, James Bond, opting for a “brief, unromantic, masculine name,” instead of having a name that was too interesting like “Peregrine Carruthers.”

Although we have to admit, Peregrine Carruthers is an absolutely fantastic name.

The best aspect of basing Bond’s name on a real ornithologist though, is that ornithology, as we all know, is the study of birds – something that the super spy was an absolute pro at.

Here’s the avid bird-watcher introducing himself in his own inimitable way, with Sean Connery starring in 1962’s Dr. No:

Once he had the name nailed down, Fleming went on to create the other aspects of his character and, as well as basing many traits on those of his own British Navy colleagues (womanising, drinking, gambling), the author used many of his own personal characteristics to form the agent we know and love today. 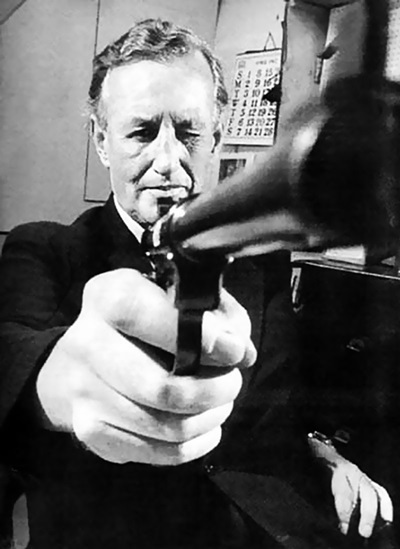 Fleming himself was a Commander in the Navy, the same rank as Bond, and the two men both had the same golf handicap, shared a love for scrambled eggs and even had the same favourite brand of cigarettes and toiletries.

Must have been all of that Wella Shockwaves hairspray that Bond was using.

Of course, you could argue that the most important thing about being a real British Naval spy, as Fleming was, is to keep the details of your adventures and those of your colleague’s entirely secret, and so, by writing numerous tell-all books (including some that were subsequently turned into 23 official films) kind of defeats the purpose...

So far we’ve had two brilliant characters with incredibly cool real-life inspirations, but the third of our JFFFFCWWAIBRP (we're really going to have to come up with a new title) is someone completely terrifying who still makes us want to sleep with the light on. 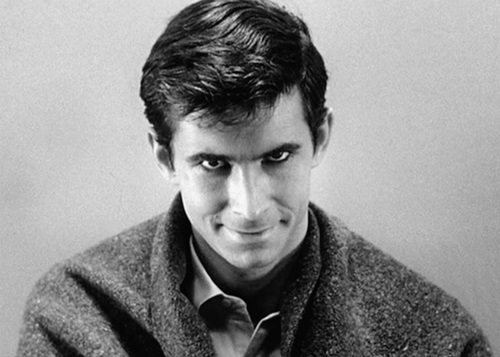 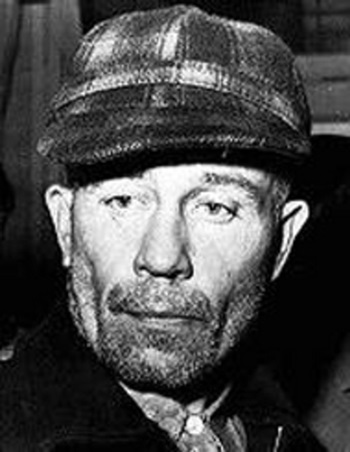 While Anthony Perkins’ perfect portrayal and Alfred Hitchcock’s super shocking film were based on Robert Bloch’s 1959 novel of the same name, the novelist was inspired by the man monster that was Ed Gein, a killer who murdered people, skinned corpses, made himself a “woman suit” (from actual real women) and also had the creepy habit of robbing graves in order to use the body parts he found to create trophies and keepsakes.

And, just like the character Bates he inspired, the man had a slight obsession with his mother. To say Freud would have a field day with this guy is just a teeny tiny little bit of an understatement.

As well as Psycho’s Norman Bates, Gein was also used as the inspiration for both Leatherface of The Texas Chainsaw Massacre fame and The Silence of the Lambs’ Buffalo ‘it rubs the lotion on its skin’ Bill.

Not a nice man. Sleep tight everyone!

Let’s just leave those nasty Norman Bates/Ed Gein thoughts behind us and sit down with a tasty White Russian with the coolest of the cool – The Dude. 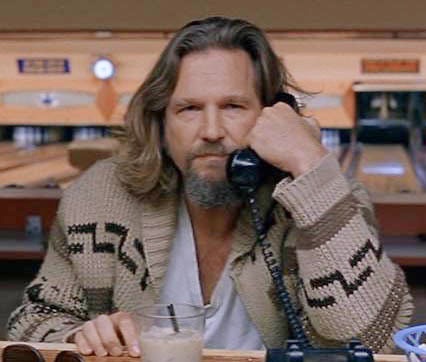 The iconic protagonist from the genius Coen brothers’ 1998 cult classic The Big Lebowski, Jeff ‘the Dude’ Lebowski – or his Dudeness, Duder or, y’know, El Duderino if you’re not into the whole brevity thing – was amazingly inspired by a real life Dude, Jeff Dowd.

Played briliantly by Jeff Bridges, everyone’s favourite laid-back slacker was actually anything but, as Dowd was, and still is, a successful film producer. The man actually helped set the Coen Brothers on their way to stardom, something you can hear him talk about in the clip below:

As far as we know though, Dowd unfortunately never had a rug that tied the room together.

That little nugget was actually based on another real-lfe friend of the Coens’, Peter Exline, a fellow screenwriter who’s own anecdotes also inspired many of the Dude’s brilliant adventures.

How great  it is to know that somewhere out there, a real Dude abides, takin’ it easy for all us sinners.

Last but most certainly not least is the Hogwarts professor who seemingly always had it in for Harry Potter and pals. 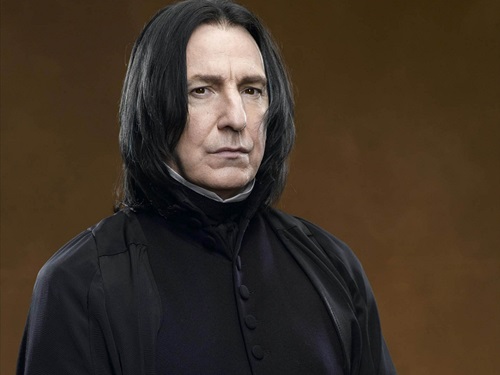 We all had a teacher like him at school – the one who we just didn’t get along with, who bore a striking resemblance to the bad guy from Die Hard and who terrifyingly had complete control over the dark arts.

According to J.K. Rowling, the author of the excellent Harry Potter adventures, her own secondary school chemistry teacher inspired the creation of Professor Severus Snape. Say hello to the scarily familiar Mr John Nettleship:

Supposedly, Nettleship actually described himself as "a short-tempered chemistry teacher with long hair ... [and a] gloomy, malodorous laboratory" who enjoyed picking on students, particularly bright students like Rowling. That all sounds remarkably similar alright...

Just what is it about those chemistry teachers...

And finally, our two bonus characters on our list of Five Favourite Famous Film Characters Who Were Actually Inspired By Real People, are none other than Miss Piggy from The Muppets (inspired by the jazz singer Peggy Lee) and the shark from Steven Spielberg’s Jaws (inspired by, ahmm, a shark).

OK, OK, so they’re not technically people, but we’re not going to tell them they’re not allowed to be on the list, are you?

One’s as terrifying as the other for God’s sake:

So there you have it folks, JOE's Five Favourite Famous Film Characters Who Were Amazingly Inspired By Real People, a pretty incredible group of people we're sure you'll agree.

And the best thing is that we didn't even have to change our title - JFFFFCWWAIBRP. Perfect.

The Big Reviewski || JOE · The Big Reviewski with Andy Serkis, Squid Game follow-ups & the return of Succession
popular
New €140 million road officially opens today, replacing one of the Ireland's most dangerous roads
QUIZ: Can you master this General Knowledge Quiz?
The cleanest towns in Ireland have been named
Ryanair is seeking applicants for "the worst job in Ireland"
The JOE Friday Pub Quiz: Week 265
QUIZ: Get your quiz on with this General Knowledge Quiz
The JOE Movie Quiz: Week 124
You may also like
5 days ago
5 of the best 2021 movies and shows on Disney+ you might have missed
5 days ago
20 years ago this week we got cinema's best jump-scare of all time
6 days ago
"We've all lost people": Jamie Lee Curtis on Ellen Ripley, Sarah Connor and her iconic Laurie Strode
6 days ago
Jamie Lee Curtis announces plans for 2022 Halloween movie festival in Ireland
1 week ago
Halloween Kills review: One of the most violent horror movies Hollywood has made in years
1 week ago
25 years since its release, here are 25 things you didn't know about the movie Michael Collins
Next Page