This would be incredible.

In terms of the list of living legends in Hollywood, it's an exclusive club that boasts names like Hanks, Streep, Washington, Eastwood, Cruise, Nicholson, Roberts, and more.

After his breakthrough role in Silverado, Costner went on to become one of the biggest stars on the planet and during the '90s, it's arguable that he had one of the greatest box office runs of the era.

Robin Hood: Prince of Thieves, The Bodyguard, JFK, Wyatt Earp, Waterworld (it made money) and the massively-underrated Tin Cup are examples of his versatility, but in terms of legacy, one film made Costner an A-lister and solidified his talent as an actor and director.

It might be nearly 30 years old, but Dances With Wolves is still a bonafide masterpiece. The film was a massive box office hit, grossing $424.2 million worldwide, and it was nominated for twelve Academy Awards - it won seven including Best Picture and Best Director for Costner.

After nearly single-handedly reviving the western, winning an Oscar, and making a load of money at the box office, Costner had the equivalent of a blank cheque in Hollywood to make whatever he wanted.

With the momentum of an Oscar win behind him, Costner was a global star and it turns out that Michael Collins' story was the one that he wanted to make next.

In a previous interview, Neil Jordan (director of Michael Collins) said that Costner wanted to play 'The Big Fella', but as we all know, that part went to Liam Neeson.

In fact, Costner was so committed to the project that he moved to Ireland and spent some time in west Cork researching Collins' life.  There was even a script written by Eoghan Harris. 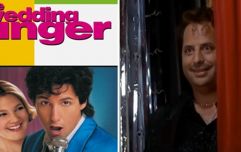 END_OF_DOCUMENT_TOKEN_TO_BE_REPLACED

With his new film, The Highwaymen, being released on Netflix on 29 March, JOE had the chance to catch up with the star of Bull Durham and Field Of Dreams to chat about Bonnie and Clyde and his career.

With regards to the script, the Oscar-winner said that the scope of the film was epic and that it resembled David Lean's iconic drama, Lawrence Of Arabia.

"There was a final line in the script that said 'God Ireland, I love you' and that was his final line in it.  While it's a fictitious line in the movie, I think it encapsulated who he was. That always affected me. I thought the script from Eoghan Harris was just superior. It was an epic. It was like a real Lawrence Of Arabia look at Collins."

Take a look at the interview below...

The Highwaymen is available to watch on Netflix from 29 March.


popular
Ridley Scott's new film starring Ben Affleck and Matt Damon is looking for hundreds of extras in Ireland
Over 200,000 people have signed petition demanding change in how media treats those in the public eye
BBC will show an 'immensely powerful' documentary about The Troubles tonight
A man has died following an incident at a Dublin shooting range
QUIZ: Can you get full marks in our Top Boy quiz?
THE JOE Movie Quiz: Week 41
QUIZ: How well do you know The Wedding Singer?
You may also like
23 hours ago
THE JOE Movie Quiz: Week 41
1 day ago
Here are the best movies on TV today
2 days ago
Here are the best movies on TV today
1 week ago
QUIZ: How quickly can you name the last ten Best Picture Oscar winners?
1 week ago
The JOE Movie Quiz: Week 40
1 week ago
Tom Hardy will be playing Ireland's most famous explorer, Ernest Shackleton, in a new film
Next Page