In all its divine controversy, Love Island has hit the headlines once again after 5,000 Ofcom complaints.

The Casa Amor twist is always central to the show's viewings, with most drama occurring after the cast comes back together in the normal villa. Reports say Teddy was depicted as a villain to partner Faye, who was waiting for him back in the main villa. As a result, she ended up coupling up with one of the newbies after seeing a picture of him kissing another woman.

4,330 of the 5,000 complaints were from people who said the postcard sent back to the original girls in the main villa was "misleading and caused unnecessary distress".

END_OF_DOCUMENT_TOKEN_TO_BE_REPLACED

However, on Sunday, Faye soon realised that she made a mistake, smoothing things over with Teddy. The pair shared a kiss, with Faye later telling Sam that she wanted to pursue things with Teddy again and would be sleeping on the day bed with him.

People online are sharing their joy that the couple are back together:

“Teddy and Faye are absolutely winning #LoveIsland, it is really theirs to lose!” one tweet read.

I believe in Faye and Teddy supremacy #LoveIsland pic.twitter.com/slbr9M5Ypv 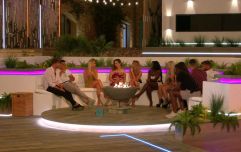 END_OF_DOCUMENT_TOKEN_TO_BE_REPLACED

"You can tell faye and teddy genuinely like eachother omg," said another.

"Millie had lots of airtime, Hugo had NONE and Faye and teddy are back on. The producers are LISTENING!" wrote another.