There are also some big Oscar favourites and the return of a much-loved serial killer show to enjoy this week...

Every week we say to ourselves, "Wow, last week had so much new stuff to watch, maybe next week will be quieter", and then next week arrives... and nope!

END_OF_DOCUMENT_TOKEN_TO_BE_REPLACED

The latest episode of The Big Reviewski can be watched in full below or you can skip to the cinema reviews (5:25), home entertainment recommendations (14:25), and classic re-watches (19:50).

Here are the new cinema releases, which will all be available on the big screens around Ireland from Friday, 5 November.

A staggeringly impressive cast including Angelina Jolie, Salma Hayek, Richard Madden, Kit Harington and our very own Barry Keoghan are the super-powered beings in charge with keeping Earth safe.

We chatted with Keoghan in the run-up to the movie's release, and you can check out that conversation in full right here:

END_OF_DOCUMENT_TOKEN_TO_BE_REPLACED

Kristen Stewart stars as Princess Diana in this new dramatic biopic set over three days spent with the royal family at Christmas time.

The Oscar talk around Stewart's performance could result in her first nomination (if not win), and with interest in all things Diana and the royal family at an all-time high, this couldn't have arrived at a better time.

We chatted to Stewart in the run-up to the movie's release, and you can check out that chat in full below. 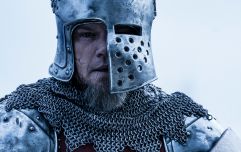 END_OF_DOCUMENT_TOKEN_TO_BE_REPLACED

The fifth season of Netflix's very naughty animated comedy continues to push the boundaries (while also educating the viewers) on all things sex, gender and sexuality.

The Hormone Monsters are back to do their duties with the growing teenagers, who are still falling in and out of lust and love and friendship with each other on a regular basis.

All episodes of the fifth season of Big Mouth will be available on Netflix from Friday, 5 November.

THE HARDER THEY FALL

Idris Elba, Regina King, Jonathan Majors, Zazie Beetz, Lakeith Stanfield and Delroy Lindo star in this vibrant and violent western, revolving around two groups of criminals both seeking revenge on each other.

The Harder They Fall is available to stream on Netflix from Wednesday, 3 November.

Set 10 years after the events of the final (at the time) Dexter season (which actually came to an end back in 2013), we see Michael C. Hall return as the serial killer who is trying to put his violent life behind him... only to be dragged back into the mix when someone from his past re-emerges.

New episodes of Dexter: New Blood will be available weekly on NOW from Monday, 8 November.

Face/Off is available to watch on Disney+ from Friday, 5 November.

Jennifer Lopez reminds us all she can be an astounding screen presence in this based-on-a-true-story crime drama.

Hustlers is available to watch on Netflix right now.

popular
The best memes from this year's Late Late Toy Show
Vicky Phelan says terminally ill people should have right to decide how to die
QUIZ: Set Yourself Up with this General Knowledge Quiz
The JOE Movie Quiz: Week 130
The Toy Show DJ brothers have been offered their very first gig
UK pub-goers snowed in with Oasis tribute band due to Storm Arwen
The full list of all the new shows and movies coming to Netflix in December
You may also like
1 week ago
WATCH: The kids are all grown up in the first trailer for the new South Park movie
1 week ago
The "next Game of Thrones" and 7 more movies and shows to watch this week
1 week ago
Disney+ reveals its Christmas movies and shows line-up
1 week ago
Huge US streaming service Peacock is available to Irish customers from today
1 week ago
WATCH: The makers of Framing Britney Spears have an even bigger cultural target for their next documentary
2 weeks ago
The Irish release date for the return of Sex and the City has been revealed
Next Page