Be prepared to meet one of the world's most horrific serial killers.

Much like its debut season, the latest episodes of Mindhunter introduced viewers to some of the most horrific and evil serial killers in history.

The portrayals of William 'Junior' Pierce, Charles Manson, Wayne Williams, David Berkowitz and Dennis Rader all left a lasting impression, but with news that David Fincher plans on making five seasons of the drama, it appears that the FBI’s budding Behavioural Science Unit will be meeting more subjects.

END_OF_DOCUMENT_TOKEN_TO_BE_REPLACED

Given the litany of real-life serial killers and murderers that the show can potentially profile, the number of stories for Mindhunter to explore is endless, but a subtle Easter egg in the show's most recent season may have confirmed that John Wayne Gacy will play a major role in the future.

Cast your mind back to a meeting that the Behavioural Science Unit were having in the basement.

At the time, the scene is mainly focused on Dr. Wendy Carr as she discusses the profile of William Henry Hance (another killer featured in Season 2), but a closer look at Carr’s list of psychopaths reveals an even more intriguing name. 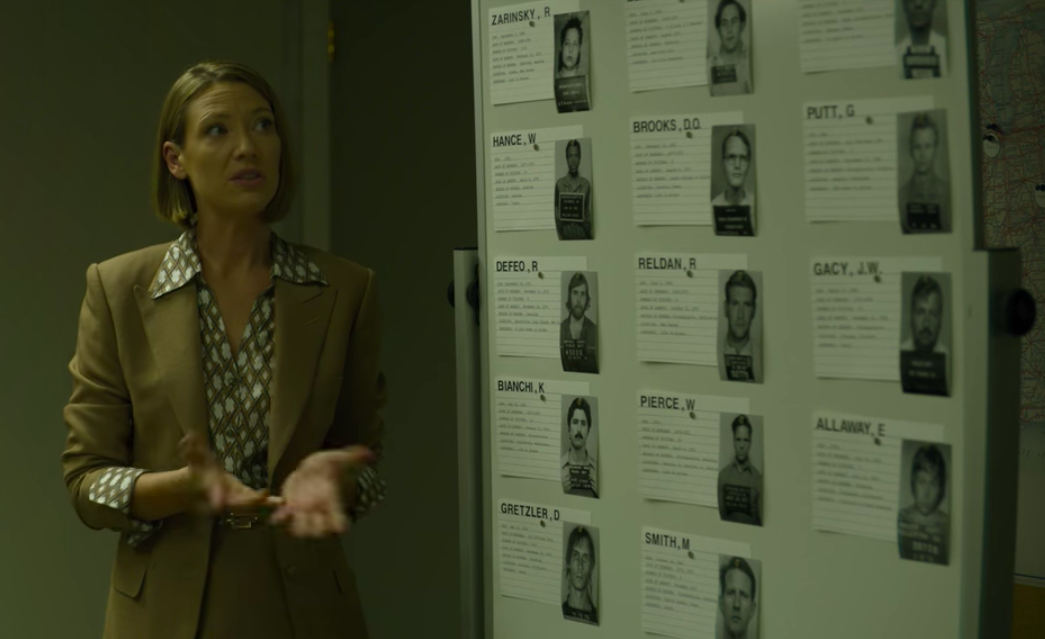 END_OF_DOCUMENT_TOKEN_TO_BE_REPLACED

Gacy was an American serial killer who raped, tortured and murdered at least 33 teenage boys and young men between 1972 and 1978 in Cook County, Illinois.

He buried 26 of his victims in the crawl space of his home. Three other victims were buried elsewhere on his property, while the bodies of his last four known victims were discarded in the Des Plaines River.

To many, Gacy is best known as the 'Killer Clown' because of his charitable services at fundraising events, parades, and children's parties, where he would dress as 'Pogo the Clown' or 'Patches the Clown', characters that he had created.

END_OF_DOCUMENT_TOKEN_TO_BE_REPLACED

It’s also worth noting that John Douglas (the real-life FBI agent that Holden Ford is based on) did interview Gacy during his time at Quantico.

While Season 3 of the show hasn't officially been confirmed by Netflix just yet, we expect an announcement to be made very soon.

popular
Nicola Bulley's phone found by the river 'could be a decoy', diving expert suggests
The Last Of Us Episode Five will premiere days earlier in Ireland and UK
Amazon Prime Video has just added 21 big movies to its library
5 years ago, Hollywood took a massive gamble on a huge sequel... and lost big time
Shock as blues singer beats Adele, Beyonce and Taylor Swift to win Song of the Year Grammy
Teenager killed in shark attack after swimming with dolphins in Australia
One of the best crime thrillers ever is among the movies on TV tonight
You may also like
2 days ago
Can you ace this ultimate Brendan Fraser quiz?
2 days ago
One of the most underrated crime thrillers of recent years is among the movies on TV tonight
2 days ago
Tom Hardy set to play Hannibal Lecter-type serial killer in new series
2 days ago
Guy Ritchie's new war movie looks like it'll be a very emotional watch
2 days ago
Dave Bautista and Jason Momoa's 'Lethal Weapon' style buddy cop movie set to shoot next year
3 days ago
Netflix backtracks on anti-password sharing measures following user outcry
Next Page