It is fair to say that David Fincher is a genius, and that he has a penchant for working with projects involving serial killers.

Se7en, The Girl With The Dragon Tattoo, Gone Girl, Zodiac... even House Of Cards, to a certain extent.

Fincher is drawn to the darkest parts of humanity, and with his latest project, he is putting a large flashlight on the topic, and wants us all to try not to look away. 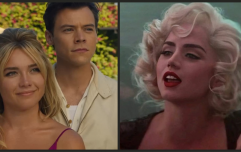 END_OF_DOCUMENT_TOKEN_TO_BE_REPLACED

Mindhunter will be released in full on Netflix on 13 October, and will follow two FBI agents in 1979 America, who travel across the county to interview captured serial killers in order to use how they think to solve currently open cases.

Fincher is executive producing (along with Charlize Theron, but no sign of her in the cast-list of mostly unknowns), and Fincher will also be directing some of the episodes along side the very impressive likes of Asif Kapadia (Amy, Senna), Tobias Lindholm (A War, A Hijacking) and Andrew Douglas (The Amityville Horror, U Want Me 2 Kill Him?).

The show has already been picked up for a second season, so we imagine this will very much be THE must-watch when it was released later this year.

popular
QUIZ: Test your knowledge with this Ultimate Friends Character Quiz
House Of The Dragon is already better than Game Of Thrones
Fine Gael Councillor slams attendees of cost of living crisis protests
The JOE Friday Pub Quiz: Week 313
Amazon Prime Video has just added 20 very big movies to its library
Details of cash payments and Christmas bonus outlined in Sinn Féin’s alternative budget
QUIZ: Name the country for each of these non-capital cities
You may also like
5 days ago
Netflix's new No.1 movie is a savage mix of Mean Girls and Cruel Intentions
1 week ago
Netflix's new thriller series gives a terrifying look at an infamous serial killer
1 week ago
Netflix has just added 11 big but completely random movies
2 weeks ago
There was a very mixed reaction at the premiere of Netflix's first adults-only movie
2 weeks ago
Netflix reveals full list of scary shows and movies arriving between now and Halloween
2 weeks ago
Netflix reportedly have plan of action for The Crown should Queen Elizabeth die
Next Page