Gary Neville and Jamie Carragher are back tonight to look at some iconic Premier League games.

We're all missing the live sport that we're so used to watching.

Some of us have essentially been made to quit cold turkey, while others are watching match repeats and sports documentaries to satisfy our cravings. 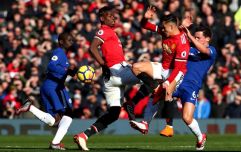 END_OF_DOCUMENT_TOKEN_TO_BE_REPLACED

And if you're really stuck for some Premier League football, Monday Night Football is returning tonight where Gary Neville and Jamie Carragher will cast their minds back on classic football matches.

The pair will run the rule over Leeds' dramatic 4-3 win over Liverpool back in November 2000 - a game the Reds were winning 2-0 until four-goal Mark Viduka inspired a stunning turnaround.

They'll also analyse Manchester United's 6-1 rout of Arsene Wenger's Arsenal in February 2001 as Dwight Yorke's first-half hat-trick set Sir Alex Ferguson's side on their way to a crushing win that edged them closer to a seventh league title in nine years.

One hour will be devoted to each game in the show, featuring match highlights, chat and plenty of personal anecdotes as Neville and Carragher serve up your football fix as best they can.

Monday Night Football kicks off tonight at 7pm and will end at 9.

popular
One of Liam Neeson's best ever performances is among the movies on TV tonight
Doctor Strange actress Zara Phythian receives 8 years for child sexual abuse
The six Eurovision countries with "irregular voting patterns" have been revealed
Eurovision producers reveal "irregular voting patterns" during Saturday night's final
Netflix has just added 11 big movies to its library
QUIZ: Try out one of our trickiest General Knowledge Quizzes yet
Irish Rail will no longer provide on-board snack options for foreseeable future
You may also like
3 years ago
Alex Scott is a quality pundit, and she's being criticised purely because she is a woman
3 years ago
Roy Keane admits "it could have been 4 or 5" as United are completely outclassed by Liverpool
3 years ago
Sky Sports announce huge deal to broadcast the NBA starting on Wednesday
3 years ago
Sky Sports release statement on Kildare v Mayo venue dispute
4 years ago
Jamie Carragher suspended by Sky for the remainder of the season
4 years ago
Driver in Jamie Carragher spitting incident has been contacted by police
Next Page