Conjuring team to bring Mortal Kombat back to the big screen

We've had a glut of them over the years, and there seems to be some kind of weird curse involved, because, almost always, they're not great.

END_OF_DOCUMENT_TOKEN_TO_BE_REPLACED

Sure you have ones that nail certain elements both faithfully and brilliantly, but the overall experience is lacking. Silent Hill is a good example of this. As for the sequel, stay well away.

Then you have ones that are admirable in many ways, but still miss the mark, such as Warcraft.

Then you have ones that are so bad they're good, like Street Fighter. Do check out the sequel/reboot there, as that's even more fascinating for how all over the place it is.

But then you have the likes of Max Payne, Tomb Raider, Doom, Prince of Persia, Super Mario Brothers, Assassin's Creed, Tekken, House of the Dead, the Resident Evil series, Need for Speed, and Hitman, which just didn't work.

At this point we'd argue that the best video game movie is Crank, but that doesn't quite count.

END_OF_DOCUMENT_TOKEN_TO_BE_REPLACED

So over the top and knowingly silly that it works, with an insanely glorious theme song to boot; Mortal Kombat isn't even a guilty pleasure, it's just a pleasure.

The filmmakers leaned into a bizarre concept and struck gold, not taking their project too seriously and just having a good time making it.

MK isn't Oscar-worthy by any stretch of the imagination, but it remains a perfectly fine popcorn pleaser.

Which is why it's good news that it's set for a proper reboot on the big screen, with a pretty decent team attached. 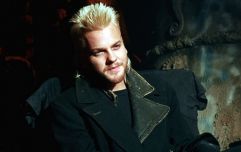 '80s horror classic The Lost Boys to be rebooted, but can the original be topped?

END_OF_DOCUMENT_TOKEN_TO_BE_REPLACED

Variety notes that James Wan of Saw and The Conjuring fame is on board to produce, with Simon McQuoid making his directorial debut.

The movie will arrive on 5 March, 2021. Pre-production kicks off this month, with shooting scheduled to get underway in Adelaide, Australia later this year.

No cast yet, nor any concrete plot details, but this is one where you really don't have to overcomplicate things.

Just give us The Miz as Johnny Cage, a decent Scorpion design and voice, and another tremendous theme tune and we're in.