It's a Bank Holiday – want to know how many of those we have left after today?

In the meantime, let's see what movies are on TV this evening, shall we? 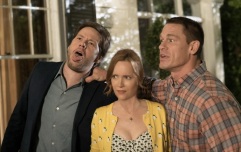 END_OF_DOCUMENT_TOKEN_TO_BE_REPLACED

While many fans of Lee Child's novels were vocally disappointed with the casting of Tom Cruise as the tall and stoic former military police investigator, he does an excellent job here.

Jack Reacher is a really strong throwback thriller with enjoyable twists, good bursts of action and a breathless opening sequence that lives long in the memory.

If you'd prefer the Cruiser in a more conventional spy adventure, you're in luck.

(Rogue Nation is the fifth one, by the way.)

Family man Brad Pitt travels across the globe amidst a ferocious zombie outbreak, desperately hoping to find a cure.

The true story of a bunch of middle-aged British women who caused a fair amount of consternation when they agreed to pose nude for a charity calendar. Helen Mirren and Julie Walters star.

Our main choice this evening? Grim, clown-themed melodrama, of course.

Joaquin Phoenix took home Oscar gold for his portrayal of Arthur Fleck; a troubled loner who struggles to make it as a professional comedian and eventually gives in to the boiling pressure around him, with violent results.

Joker broke the billion-dollar mark at the worldwide box office and though no follow-up has been officially announced as of yet, you can bet it's in the works.

John Travolta features in a film with the following plot:

"A multi-millionaire speedboat racing champion leads a double life that lands him in trouble with the police and drug lords."

0% on Rotten Tomatoes, you say?

The one with Michael Caine in it, which is good.

Not to be confused with the Sylvester Stallone version, which is not good.

Gotta be bad for the moisturising routine, that.