Here are the 9 best movies on TV this Valentine's Day

Gotta be nothing but romance, right?

As ever, the TV gods seek to confuse us. But they're also here to entertain.

Here's the best around on this Friday, 14 February...

007 on his very first assignment.

Gina Carano swaps out MMA for a big screen spy adventure that boasts the likes of Michael Fassbender, Channing Tatum and Ewan McGregor in support.

END_OF_DOCUMENT_TOKEN_TO_BE_REPLACED

Superb award-winning drama set in Korea during Japanese rule. A young con artist is installed in a rich home as a handmaiden only for things to take a dramatic turn. 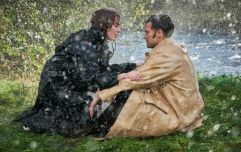 END_OF_DOCUMENT_TOKEN_TO_BE_REPLACED

Arch-enemies Sylvester Stallone and Wesley Snipes get thawed out, wake up in the future and try to kill one another all over again.

Jake Gyllenhaal and Michael Pêna as two Los Angeles cops that find themselves in a violent escalating nightmare.

Simon Pegg sets out to become a top magazine writer in America, encountering love and wacky characters along the way. Based on the wildly obnoxious Toby Young book of the same name.

The Big Reviewski || JOE · Colm Meaney & his Pixie co-stars on deadly gangster priests, Irish accents & pickled onion crisps
popular
Donald Trump seems to indicate he will run for Presidency again in 2024
What the hell is 'Stomp and Holler', and why does Spotify insist that you love it?
Micheál Martin responds to claims that he is "protecting the pubs in Dublin"
Elliot Page – Inception and Juno star announces he is transgender
Five Covid deaths confirmed, 270 new cases
Sale of luxury castle in Kerry, described as "one of Ireland’s best kept secrets”, completed for €4.5 million
Here are the best movies on TV on Wednesday
You may also like
1 day ago
Get in, losers! According to Lindsay Lohan a Mean Girls sequel could be on the way
1 day ago
Tayto Park announce retro drive-in Christmas movie weekend
1 day ago
Information revealed about Black Panther sequel
2 days ago
Chadwick Boseman honoured by Marvel and Disney+ in new Black Panther credits
2 days ago
Liam Neeson to narrate landmark two-part series marking the 175th anniversary of the Great Famine
2 days ago
Listen carefully, Tubs says he didn't use the F-bomb on live TV... as Toy Show Appeal donations top €6.4million
Next Page