If you're not into the whole 'football' thing, can we interest you in some movies on the box? Here's how it looks on Tuesday, 29 November...

Valerian and the City of a Thousand Planets – Film4 – 6.20pm 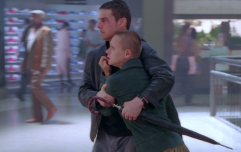 Spielberg's best movie is among the movies on TV tonight

END_OF_DOCUMENT_TOKEN_TO_BE_REPLACED

It was supposed to be the new Fifth Element, in that it confounded critics, made decent bank, and developed a beloved cult reputation.

Instead it underperformed at the box office and made little impression with anyone. It's got Rihanna in it, though?

The beginning of the end for the mainline Harry Potter franchise.

Colm Meaney just might steal this whole damn movie. You know the drill here – criminals on an airplane, insane cast, over-the-top thrills, holds up in 2022.

The sixth one. Probably the best one. Love the bit at the start where he wakes up in a generic darkened room and it says he's in Belfast. Sure thing, Tom!

Clint Eastwood directs and stars in one of the greatest Westerns ever made.

Eddie Murphy steps into the Letterman jacket of Axel Foley for the very first time as the fast-talking Detroit police officer flees his jurisdiction to solve the quite shocking murder of his friend.

Decent, if pretty gross, horror in which a group of criminals kidnap a young couple who are hiding a very dark, very dangerous secret of their own.

The 2015 reboot, which failed miserably. It's certainly not FANT4STIC, but it's maybe not as terrible as its reputation suggests.

Jim Carrey and Jeff Daniels clown around in a hit comedy that never needed a sequel.

Peter O'Toole stars as an ageing actor who develops a friendship with a teenager.

Kevin Costner motivates a group of underdogs with a talent for long-distance running as they bid to become champions.