Get ready to mark your calendars.

It's time to free up some space on your TV box because that most anticipated of schedules has arrived, the movie lineup on terrestrial TV in Ireland this Christmas.

We won't keep you waiting; below is the pick of the bunch of the movies on RTÉ and Virgin Media over the festive season (you can see the TG4 lineup here); all you have to do now is look forward to parking your arse on the couch.

Unlike Virgin Media and TG4, the national broadcaster hasn't provided an exact time or transmission date for their Christmas movies just yet. We do know, however, that the schedule will feature all of the movies outlined below...

The Christmas Letter is a new Irish animation based on the true story of a Christmas letter to Santa found in Terenure in Dublin decades after it was sent, with the voices of Catriona Balfe and Fiona Shaw.

Beauty and the Beast is arguably the best live-action remake that Disney have made to date. We're still not mad on Emma Watson as Belle, however.

Paddington 2 is genuinely great with Hugh Grant and Brendan Gleeson playing to the rafters.

Bridget Jones's Baby is a safe bet to settle down on the couch with while Damo and Ivor – The Movie, well, it's not the best of the bunch.

Office Christmas Party is extremely underrated while younger viewers will enjoy the likes of Storks and Irish movie Float Like A Butterfly, with Hazel Doube as a woman champion boxer. END_OF_DOCUMENT_TOKEN_TO_BE_REPLACED

It's not Christmas without a few classics and RTÉ will show the likes of Willy Wonka and the Chocolate Factory, Santa Claus 2, Home Alone and Mrs. Doubtfire.

As is the norm, we'll also be getting plenty of Indiana Jones and Marty McFly from the Back to the Future trilogy. 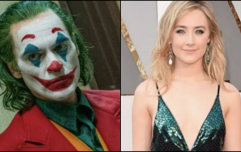 Oscar Nominations: 11 nominations for Joker and another Best Actress nod for Saoirse Ronan

END_OF_DOCUMENT_TOKEN_TO_BE_REPLACED

Virgin on Demand will also have Home Alone, Frozen, Love Actually and The Harry Potter Collection.