Netflix is making a thriller TV series about social media

Love it or hate it, you can barely escape it - social media is a force that dominates day-to-day life and probably won't die down any time soon.

There are positives and there are negatives, the latter of which probably being the best material to construct a brand new thriller about, were you in the mood.

It turns out that the people over at Netflix are and thus have given the green light to Clickbait, an eight-episode series that is already shooting in Australia.

The show will star the likes of Adrien Grenier (aka Vinny Chase from Entourage), Betty Gabriel (as seen in the likes of Get Out, Unfriended: Dark Web and Upgrade) and Zoe Kazan (The Big Sick) among others.

Clickbait will "explore the ways in which people's most dangerous and uncontrolled impulses are fuelled in the age of social media" while revealing "the ever-widening fractures between virtual and real-life personas," according to the Hollywood Reporter. 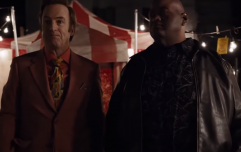 END_OF_DOCUMENT_TOKEN_TO_BE_REPLACED

The plot will see a woman by the name of Pia Brewer (Kazan) search for answers as she looks to track down her missing brother in a case that becomes a viral sensation.

No word on a premiere date yet but you can expect some creative hashtags, probably.


popular
QUIZ: Can you name all the Irish counties just by their shape?
PERSONALITY TEST: What percent tosser are you?
Ted Bundy documentary featuring long-term girlfriend Elizabeth Kendall released this week
25 jokes which make Airplane! one of the funniest movies of all time
QUIZ: Can you match the Father Ted quote to the character that said it?
Ireland's longest bridge is set to open today
PERSONALITY TEST: Which Peaky Blinders character are you?
You may also like
3 days ago
5 new Netflix additions to watch this weekend
6 days ago
Here are all the new original titles coming to Netflix in February
1 week ago
Haunting of Hill House star says the sequel will be more intense than Season 1
1 week ago
WATCH: Trailer released for CG remake of Pokémon: Mewtwo Strikes Back
1 week ago
Season 5 of Better Call Saul will see the return of two beloved Breaking Bad characters
1 week ago
Penn Badgley on the 'really strange' way they work Joe's voiceovers in while filming You
Next Page