Captain Jack is walking the plank.

In terms of cinemas most memorable entrances, it's very likely that the first time we saw Johnny Depp's swashbuckling pirate enter the fray in Pirates of the Caribbean will feature very highly.

Brazen, determined, and brimming with a wild spirit of adventure, Captain Jack Sparrow gazed upon the horizon as we all expected the camera to pan behind and reveal a glorious ship that's brimming with jewels, decadence, and splendour. 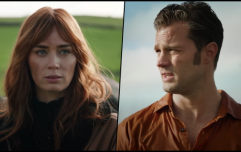 END_OF_DOCUMENT_TOKEN_TO_BE_REPLACED

What we got was a man navigating a dingy that was slowly sinking to the depths of the ocean due to his own brilliance/madness.

Ladies and gents,  today is the day you will always remember as the day, you almost caught Captain Jack Sparrow.

He may be the worst pirate that you ever heard of, but you have heard of him.

The first Pirates of the Caribbean film was an absolute riot as Depp channelled his inner Keith Richards to create a character that not only became a bonafide pop-culture icon, but also Oscar-nominated in the category of Best Actor in a Leading Role.

A franchise was born and after five films at the helm of the Black Pearl, it appears that Depp will be hanging up his hat and walking the plank from the franchise.

In an interview with The Hollywood Reporter, Disney's Film Production Chief,  Sean Bailey, confirmed that the next Pirates film won't involve Depp.

Deadpool writers Rhett Reese and Paul Wernick are overseeing the reboot and Bailey said that: "We want to bring in a new energy and vitality. I love the [Pirates] movies, but part of the reason Paul and Rhett are so interesting is that we want to give it a kick in the pants. And that's what I've tasked them with."

As for Depp's next roles, he's set to star in City of Lies  and Waiting for the Barbarians.