One of the most interesting characters to ever play the beautiful game.

Nicolas Anelka's career was one that football fans couldn't help but keep an eye on.

The Frenchman played for some of the biggest clubs in the world, as well as some slightly more surprising sides (with the greatest of respect to Bolton and West Brom), and his talent was undeniable. 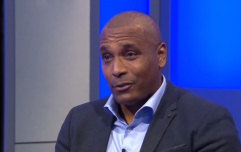 WATCH: Clinton Morrison stole the show doing punditry this weekend with a moment of brilliance

END_OF_DOCUMENT_TOKEN_TO_BE_REPLACED

But his time as a professional footballer was also filled with legal trouble and controversies to beat the band.

All will be examined in an upcoming Netflix documentary to be released next month, titled Anelka: Misunderstood.

Arsene Wenger, Thierry Henry, Didier Drogba, Emmanuel Petit and Paul Pogba are amongst the high-profile figures to feature in the documentary, as well as interviews with Nicolas himself about the highs and lows of his career.

The documentary will take a look at his dramatic exit from the French squad, his legal issues, as well as his achievements on the pitch.

Anelka: Misunderstood will land on Netflix on 5 August. Check out the trailer here:

popular
Reopening of restaurants and gastropubs, travel between counties set to be approved by government
REVEALED: The winners of all 28 categories in the 2020 Just Eat National Takeaway Awards
Publicans say government “can’t hide behind NPHET” over decision to keep wet pubs closed
QUIZ: Can you answer all the £1 million questions from Who Wants to be a Millionaire?
COMPETITION: Win €745 worth of top quality gym equipment from McSport to celebrate their Black Friday sale
QUIZ: How will you fare in our ‘Not as it seems’ quiz?
Wild Mountain Thyme director defends movie's accents and says Irish accents are too difficult to understand
You may also like
1 day ago
Diego Maradona: A remarkable career in pictures
1 day ago
Tributes pour in after Diego Maradona dies aged 60
2 days ago
PS5 controller trigger will tighten to indicate player fatigue on FIFA 21
1 week ago
Megan Rapinoe admits 'teasing the English is such a pleasure'
1 week ago
Ryan Reynolds and Rob McElhenney's takeover of Wrexham AFC approved
2 weeks ago
Enjoy a 'Super Sundae' with a €10 No-Lose Bet on Liverpool v Man City with BoyleSports
Next Page