Some viewers complained about former England striker on ITV’s World Cup Live coverage of the England versus Croatia game. 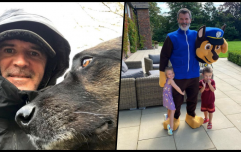 END_OF_DOCUMENT_TOKEN_TO_BE_REPLACED

During the broadcast, Wright mocked how Roy Keane pronounced the word "final".

Ofcom assessed the complaints but said that they will not be launching an investigation.

"We carefully assessed complaints from viewers who objected to one pundit imitating another’s accent," it said.

"However, we found the exchange was intended in good humour."

popular
Amazon Prime Video has just added 21 big movies to its library
One of Liam Neeson's best ever performances is among the movies on TV tonight
Emirates is looking to hire cabin crew members in Ireland for tax-free jobs
Shock as dead dolphin vandalised with graffiti on Dublin beach
Amber Heard "fought really hard" to appear in Aquaman 2 despite pared down role
Has anyone seen Mr Tayto?
PlayStation unveils all-new PS Plus game line-up
You may also like
1 year ago
Roy Keane reacts to the dancing Keano FIFA TikTok meme
2 years ago
Roy Keane will be appearing on this week's Late Late Show
2 years ago
WATCH: Roy Keane told to "f**k off" in cameo appearance in new season of The Young Offenders
2 years ago
"I’d rather have a couple of mates than a couple of medals" - Jason McAteer responds to Roy Keane comments
3 years ago
Donncha O’Callaghan's interview with Roy Keane looks absolutely unmissable
5 days ago
A tense and twisty thriller is among the movies on TV tonight
Next Page