This is going to be good!

Happenings, in association with Guinness Open Gate Brewery, is set to host a series of three open-air screenings on Thursday 29 August, as well as Thursday 5 and Thursday 19 September.

The Dublin-based pop-up cultural events company is well-known for its open-air cinema and will be bringing some great movies to the Guinness Open Gate Brewery.

First up will be the original Willy Wonka and the Chocolate Factory. This will be followed by Patrick Swayze and Jennifer Grey’s rhythmic and romantic Dirty Dancing.

The final screening will be Sing Street, the 2016 coming of age comedy-drama set in 1980’s Dublin and featuring an all-star Irish cast and crew.

All three screenings will also feature some exciting new beers which will be available exclusively for a limited time.

They have been brewed up by the team at the Guinness Open Gate Brewery; the home to all beer innovation and experimentation at St. James’s Gate. 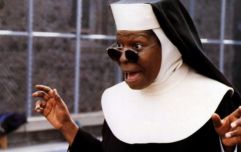 Sister Act: The Musical is coming to Dublin in 2020

END_OF_DOCUMENT_TOKEN_TO_BE_REPLACED

For anyone tagging along to the event, the beers will be enjoyed alongside Cornude Artisan Popcorn which are made in The Liberties. They're one-of-a-kind and made to order with handpicked taste combinations.

Tickets cost €12.80 and include access to one screening and a pint of your choice.

Tickets are on sale now and available from Happenings Usheru page, which you can check out here.


popular
QUIZ: How well do you know Will Smith's movie career?
The JOE Friday Pub Quiz: Week 174
Met Éireann issue low temperature weather warning for 25 counties
More bad news for gamers as another two of 2020's biggest games get pushed back
Boozy holidays in the Balearic Islands will change as new laws crack down on alcohol-fuelled trips
Temperatures drop to -4 as weather warning is in place for 17 counties
QUIZ: How many of these Disney Channel TV shows can you name?
You may also like
2 days ago
A homeless woman in her 20s has died in a Dublin hostel
2 days ago
Road closures to remain in place on Thursday morning due to farmer protest
3 days ago
Eoghan Murphy "saddened" by serious injuries to homeless man, removes campaign posters from scene
3 days ago
Man left in serious condition after his tent was removed as he slept in it
3 days ago
"Partial body remains" found in burnt out vehicle in Dublin
3 days ago
Gardaí issue advisory ahead of large scale protest in Dublin on Wednesday morning
Next Page