OPINION: Why, despite its flaws, 13 Reasons Why is a must-watch

It's impossible to make a show that discusses suicide in detail without having a number of critics. You are going to do something that somebody finds insensitive, or unrealistic. You just have to do your best to make it as genuine as possible. 13 Reasons Why does this.

13 Reasons Why is a 13-episode series that follows the life and death of one Hannah Baker, a high-school student who died by suicide and leaves 13 tapes to all of those who had a part in her death. We see the show through the eyes of Clay Jensen, a boy who had feelings for Hannah, and was never quite sure if the feelings were mutual.

A number of people have an issue with the premise of the show from the get-go, and that the idea of blaming school kids for the death of a fellow student could result in the show having the opposite effect that it wishes to, and that teenagers shouldn't be made feel responsible for someone else dying by suicide. 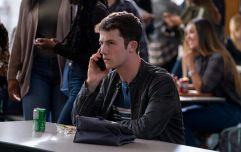 Trailer released for the final season of 13 Reasons Why

END_OF_DOCUMENT_TOKEN_TO_BE_REPLACED

Other people criticise the character of Hannah, and say that she is as bad as the rest of them for pinning her death on them, knowing the devastating effects this will have on them for the rest of their lives. But a point that a number of people seem to be missing is that Hannah is not portrayed as perfect. She is not an angelic figure who does no wrong. Hannah is a flawed character. The show isn't about how the good girl got her revenge against the cruel bullies. The show is about how everything affects everyone. And if teenagers are able to take one message from the show, it's that their actions can have serious consequences, no matter how insignificant they may seem to them.

Hannah is bullied in the show, but not the way television and movies normally portray bullying. This isn't the big kids shoving the small kid in the locker. This isn't the jock robbing the nerd's lunch money. This is real. It's slut-shaming, it's being excluded, it's being treated like dirt and it's a lack of adequate mental health facilities at her disposal. It's real.

The most common criticisms the show has faced since its release is the fact that it shows a rape scene, and a suicide scene in gruesome detail. Despite the fact that before the show begins, there is a warning stating that scenes in these episodes could be triggering, we can assume that if a vulnerable young person has made it to episodes 12 and 13 (the episodes in which these scenes take place) they are going to want to finish out the show, and will almost definitely ignore these warnings.

Showing a suicide scene in such detail goes against everything that the experts say. For someone with suicidal tendencies, this scene could be something that pushes them over the edge. But it could also be the thing that finally encourages them to get help. Seeking help is the most important thing someone suffering with suicidal thoughts can do. Getting help is what saves people, as long as the help does what it's supposed to do: help.

In the final episode, Hannah decides to give life one last try. She goes to the school counselor looking for help. She tells him that she was raped, but refuses to say who did it. Mr Porter, the counselor, implies that there is very little Hannah can do about this, and that she's better off just carrying on with her life. This is the scene that resonates with me most, and perhaps the one that is most relevant to today's society. With mental health awareness being one of the most talked about things in the country these days, and people being encouraged to seek help if they need it, the importance also has to be placed on the help being satisfactory.

In the show, Hannah does what she should, she seeks help. But the help wasn't good enough, and that's the note the show ends on.

13 Reasons Why isn't like other shows. Watching it I was worried that the last episode would reveal that Hannah never really died, and that she faked it or something ridiculous like that. But she was dead. She killed herself. Just like 451 people in Ireland did in 2015. Perhaps directing the conversation towards young people, as 13 Reasons has done, is what needs to be done. The show is currently the most Tweeted about TV show of 2017, and one can only hope that this leads to a positive change with regards to this extremely serious issue. To quote Clay Jensen from the final episode, "It has to get better".